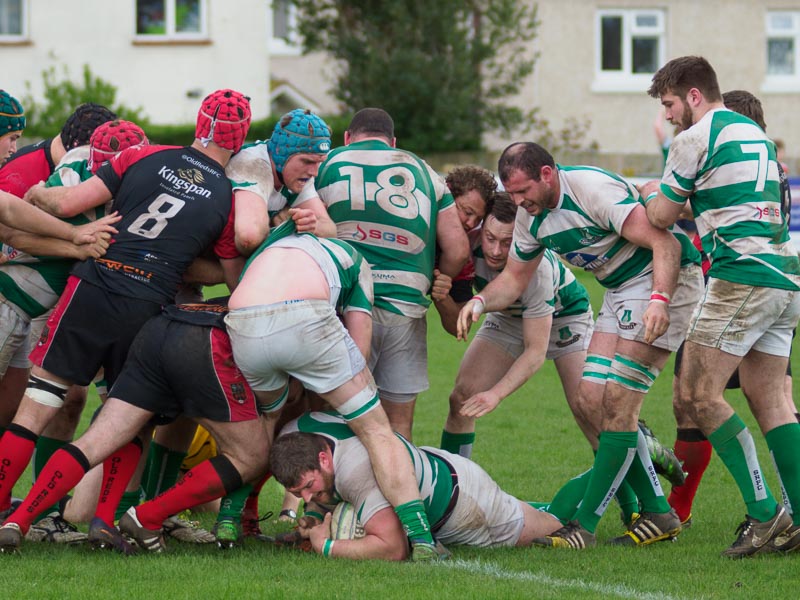 Salisbury left everything on the pitch in a magnificent effort against newly crowned champions Old Redcliffians in front of a large and appreciative crowd on Saturday.

Old Reds are a polished side and took only eight minutes to cross the whitewash through Dan Fry. It would have been easy for the hosts to crumble but a season in National Division 3 has brought a harder edge to Josh Green’s men and after a series of probes Rob Larcombe picked the line to make it three tries in three weeks. Then came the try of the game when Green broke from a scrimmage and fed Dave Tonge, the ball went wide and found Ollie Bowden who smartly stepped two defenders and put veteran winger Tom Pottage in for a vintage try. Matt Loader added the conversion and the Green and Whites had their noses in front.

Old Reds responded with a clinical try from Oli Rayner but Loader had the last say of the half knocking over a penalty for a one point lead at the break.

The visitors opened the second period with a try from Ezra Caven but Salisbury rallied again when prop Gary Williamson was driven over for a score. The hosts were defending ferociously, Johnny Kay leading the tackle count and Rob Best and Tom Ranabaldo smashed into the Old Reds ranks time and time again. When the visitors did break they were unable to penetrate the wall that was Larcombe and man of the match Bowden.

As the clock ticked down it looked as if Salisbury were to pull off a seismic one point victory but lost possession and the visitors made the most of it to score in injury time through Craig Owen. The Green and White rallied, used possession to gain territory and hammered at the Old Reds line, their forwards leading the effort, eventually Tonge broke but was dragged down an agonizing foot short.

This was a superhuman performance from everyone in the Salisbury side, a fact acknowledged by the crowd and the generous summing up of the visiting players who described Salisbury “as a top four side who attacked better than anyone they had played this season” but sadly Lydney’s win at Launceston condemns the Green and Whites to relegation; Coach Neil Loader has already stated that the work to win South West Division One East, and return to the National League, “starts on Tuesday evening on the training field”.