Dings Crusaders vs. 1st XV (away) 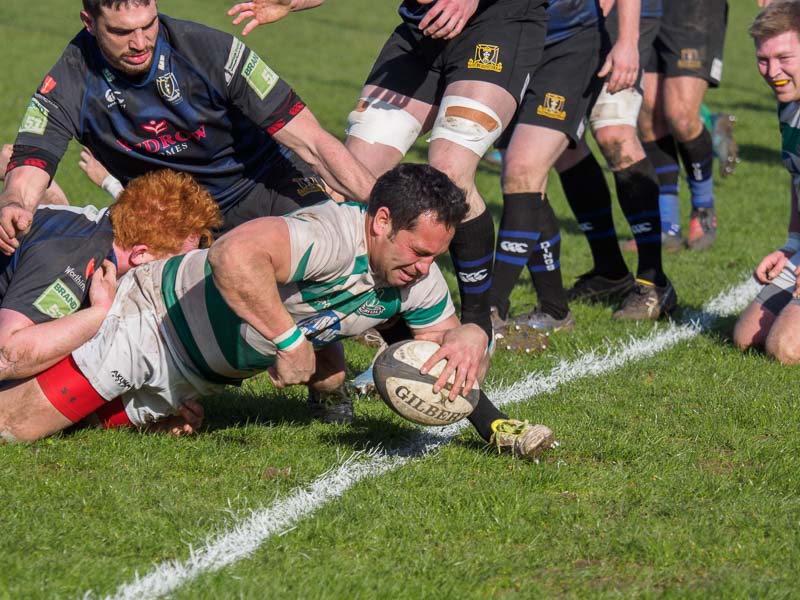 Salisbury put up a spirited defence on Saturday but found promotion hopefuls Dings Crusaders too strong and well drilled.

With the wind behind them Dings opened the scoring when right wing George Hooper crossed in the corner. Salisbury responded immediately with a searing break from Gerard Narruhn who found Josh Gren in support and the skipper fed Dave Tonge who dived over, Matt Loader adding the extras. The home side applied pressure and scored with two penalties either side of a sin binning for Liam Gilbert who prevented a quick tap penalty from being taken. Dings took advantage of their numerical superiority and a series of drives resulted in a score for hooker Paul Fincken.

Salisbury dusted themselves down and a quickly taken penalty by Tonge set Gilbert away, Rob Best was up in support and Rob Larcombe finished the move with another defence splitting line; Loader again converted for a half time score of 18-14.

Sylvan Edwards extended the home lead with a smart break immediately after the break and then a superb clearance from Loader pinned the hosts in the corner but Salisbury could not covert the position into points. Gary Williamson became Salisbury’s second yellow card of the day in a decision that baffled both sets of supporters and Dings made their number count pushing the Salisbury pack back for Tom Knight to score. It now became one way traffic as the visitors tired but still managed a good score through Narruhn who dived over, with Loader again converting. Salisbury needed one more try for the bonus point but could not quite get there, the final scoreline of 54-21 flattering the home side.

Salisbury will dust themselves down this week before taking on the confirmed Champions of the league, Old Redcliffians, next Saturday, in their last home match and will be hoping to cause an upset.