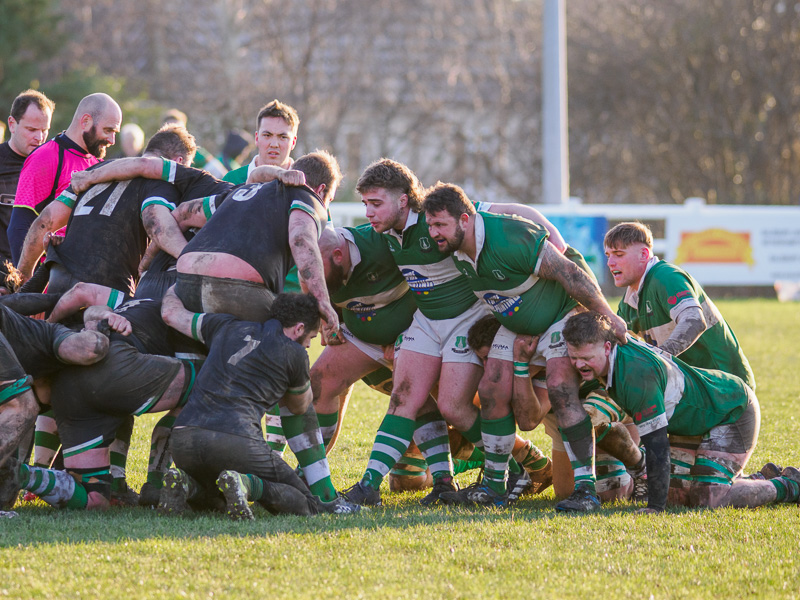 21st. January 2023: Salisbury hosted league strugglers Buckingham in only their second fixture since 3rd December - poor conditions has resulted in three league postponements. Despite the lack of game time, neither side appeared rusty and provided an eventful encounter for an enthusiastic crowd at Castle Road.

A lively start delivered early scores. The visitors defended early pressure but their clearance kick was gathered on halfway by Salisbury who immediately ran it back for fly half Jack Fitzgerald to score. Tom Tully added the extras after only 5 mins. Buckingham weren’t daunted and responded positively when their lively backline broke through the host’s midfield to score on 10 minutes. With the score at 7 – 5 both sides were playing with ambition.

Despite Salisbury’s scrum having the upper hand for much of the afternoon, Buckingham were able to secure sufficient possession to place the hosts under some pressure. Guile and pace provided the visitors with opportunity and field position. They were unlucky not to score on 18 minutes when Salisbury successfully defended a driving maul on their line. Salisbury’s second try came when Fitzgerald caught another poor kick. Intelligent running and pace got him past a number of defenders for an unconverted try on 21 minutes. This was quickly followed with another try when Salisbury moved the ball quickly from an attacking lineout for flanker James Kennedy to finish. The hosts entered the second quarter with a 17 – 5 lead.

The remainder of the first half belonged to Buckingham. After stealing possession from a Salisbury lineout, the visitors were able to sustain pressure. Their fly half Josh Graham cut through and threatened the line. Bucks then opted to run a penalty, earned an attacking scrum and subsequently scored. With the extras successfully added the half ended at 17 – 12 in Salisbury’s favour.

Bucks had the better field position for much of the second half but their attacking pace was matched by Salisbury’s determined defence. The visitors took the lead with a converted score on 51 minutes which was followed by another 5 minutes later when Bucks opted to run another penalty. With the score line now at 17 – 26, Salisbury were under significant pressure. They responded early in the final quarter with a searing break by Henry Toomer following an attacking scrummage resulting in a try under the posts. Still trailing, Salibury’s task wasn’t helped by a red card and being reduced to 14 men. Despite this they upped the tempo. Bucks failed to clear from a defensive scrum, Salisbury countered enabling Matthew Woodhouse to score with only 4 minutes remaining. Fitzgerald converted and the hosts finished 31 – 26 winners.

Salisbury are 7th in Regional 2 Tribute South and will travel to Wiltshire rivals 8th-place Devizes next week. A keenly contested fixture is anticipated and will be well worth the journey for the Castle Road faithful.