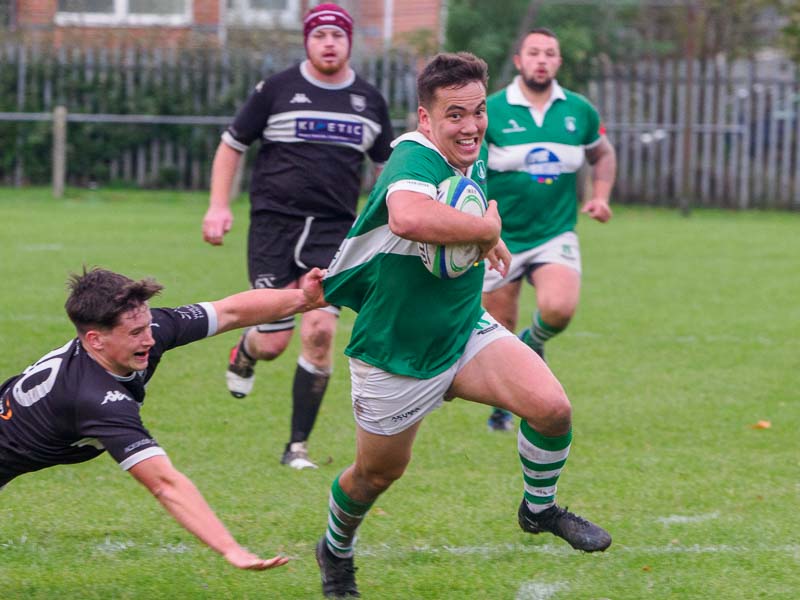 29th. October 2022 - If Matthew Woodhouse had dominated last week’s headlines with his match winning hat-trick of tries then this week was Xavier Hastings time in the spotlight as his brace of tries, both of which he converted himself, and a penalty for good measure, guided Salisbury home.

The weather looked ominous, but the skies cleared for kick off in front of a large crowd drawn from Wiltshire’s highlands of Devizes and the lowlands of the Sarum Basin and all enjoying the intoxicating atmosphere of a local derby. Salisbury had beaten Devizes twice last year but still contrived to finish runners up to them at the end of the season. The Saddlebacks had travelled down with hopes high having enjoyed a better start to the season while the home side, despite a number of changes, were looking to build on last weeks win on the road.

The city side were first across the whitewash, Hastings, moving from the centres to No 8, the recipient of some huge forward efforts, and converting the score himself. The visitors were soon level when a delightful chip was gathered for a converted score. Hastings again put the hosts ahead with a penalty.

The match became a tense arm wrestle as both sides looked for the break through, Bobby Spiers was showing to great effect with a battling performance in the back row, and half back pairing of Sandy Wheatley and Jack Fitzgerald constantly probing for weaknesses, It was Devizes who finished the half on top as another forward drive saw their prop flop over the line for the lead.

Both sides could scent victory in the second half but could not contrive to complete the move which would achieve that goal. It was last weeks hero who finished off a fine passing move by Salisbury who broke the deadlock and gave the Green and Whites a slender lead 15-12.

Salisbury were in the ascendancy as the Saddlebacks were disrupted by injury and from a period of pressure Wheatley broke and showed great sleight of hand out of the tackle, put Hastings in under the posts, again converting the try himself.  The home side now had to endure a period of pressure as Devizes threw everything they had at the home defence which held firm until another forward effort saw the visitors close the lead to a single score but that was all they could muster as the Castle Road faithful celebrated long, loudly and hard.

This was a very encouraging display by Salisbury, far from the perfect display but a tantalising glimpse of what the young coaching team are aiming for.  This week they make the long journey to Grove and the supporters expect fireworks and not another damp squib.