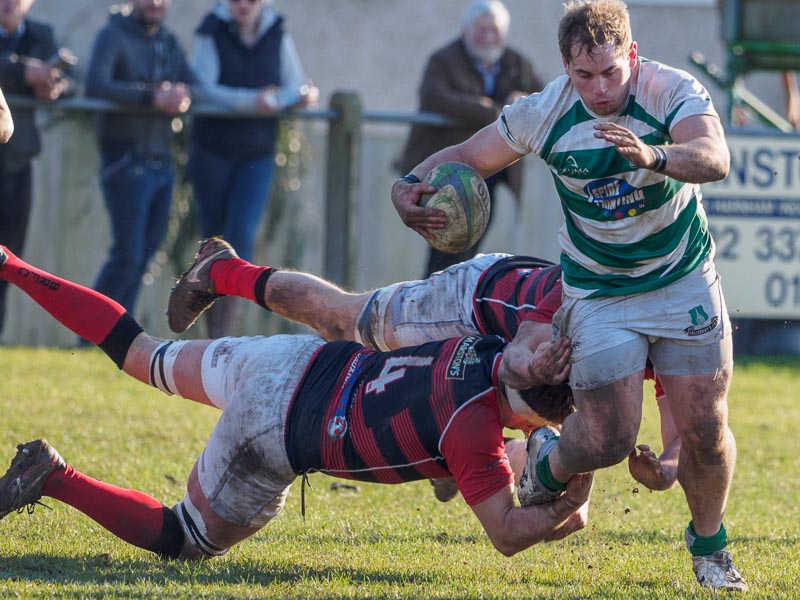 Bromsgrove have probably been wondering what logic has dictated that they are a team playing in the South West. They arrived at Castle Road with a point to prove and set about demonstrating that the journey was no hindrance to them in this bottom-of the-table encounter. Within 16 minutes they had taken a 15-3 lead as Salisbury forgot the basics of any sport which is that you have to defend if you are to stop your opponents scoring. Jon Critchlow ran through unhindered from half-way in the first minute and, after Critchlow and Tom Lane had exchanged penalties, smooth transfer of the ball put Josh Holt outside the tentative Salisbury defence to score a second try.

The home side seemed to feel at this stage that they had been generous enough and forward pressure led to a series of drives on the Bromsgrove line and Matt Loader took advantage of a disorganised Bromsgrove defence to jink his way over for Lane to convert. Inspired by this, the Salisbury pack continued to exert their influence and Matt Dawson, whose ball-carrying has been missed by Salisbury recently, made a piercing run and off-loaded to Josh Green for a score, converted by Lane to give Salisbury a barely deserved lead at 17-15. However, a failure to chase a clearance kick allowed the visitors to gather the kick, make a clean break in mid-field and hand the ball onto Ollie Bache on the wing who crossed for another Bromsgrove try, converted by Critchlow for the half-time lead at 22-17.

Half-time gave Salisbury the opportunity to regroup and for the side to organise to deal with the threat posed by the speedy visiting backs. The second half opened with Bromsgrove once again seeking space to use their speed but this time finding less space and more determined defenders. The increased pressure led to mistakes that Salisbury could benefit from for Lane to kick a penalty and for Dave Tonge’s quick thinking at a short penalty to be rewarded by a try for Green in the corner putting Salisbury in the lead again by 25 points to 22. Forward superiority was further rewarded after some slick forward exchanges with a try for Dawson, converted by Lane to give the home side a 10 point lead.

Now Salisbury were faced with a real test of character as two yellow cards reduced them to 13 men and tackling was the order of the day. When the visitors finally breached the home defence, the referee pulled them back for a forward pass and the home support could breathe again. This proved to be Bromsgrove’s last gasp and a penalty from 50 metres by Lane and a final try from Green, converted by Lane, at the death saw Salisbury run out as 42-22 winners. Who could have predicted that at half-time?

Chairman, Richard Larcombe, summed it all up when he described the whole match as “Exasperating, exhilarating, entertaining.” It was not possible to argue with that.

The win moves the club one more place up the league table but more wins are needed to secure a place in National 3 South West for next season. Hopefully the team will be ready to start from the first whistle at Cleve in their next game and can show the skill and determination they showed in the second half on Saturday.