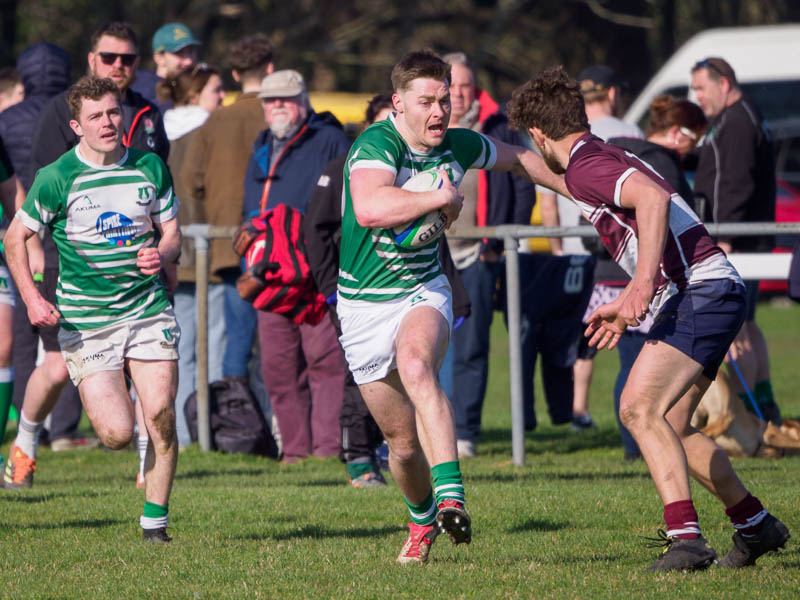 Salisbury arrived in Wareham knowing that they needed maximum points from their final three matches to stand any chance of overhauling Devizes at the top of the table.

The Swans were not going to sit back and watch this happen and looked the more threatening from the kick off. A searching kick into the corner saw Blake Ryder scurrying back to recover the position but in the ensuing ruck a stray boot caused him to leave the field for a Head Injury Assessment forcing the visitors to adjust their line-up. Swans now swung the ball right and their winger showed good turn of foot to go in for a score, duly converted.

Tom Tully responded with a penalty and Ed Crossley broke and chipped ahead, Alex Park gathered and sent Dan Hammond flying for the line. The game continued at a furious pace and from a poor clearance kick Swans exploited the space on their left flank to add a second try.

Salisbury now began to click through their gears and were showing good handling skills but failing to make the final pass count. After a patient build up Will Murley popped up in support, dummied the last defender and crashed over for a score. The floodgates were now open, and the outstanding Park raced in to score behind the posts before Dom Porter bulldozed his way over for the bonus point try shortly before the break, Sam Waters adding the conversion points for both of these scores, and a 12-27 half time lead.

Salisbury with a worrying number of injuries and all replacements deployed, took their foot off the gas slightly but still retained control and did not allow Swans to cross their line at all in the second half. At the other end of the pitch George Fossey was rewarded for his hard work with a try and Man of the Match Park grabbed a second, converted by Waters to finish the game 12-39.

The physio looks to have a busy week as Salisbury prepare to host Dorchester in front of an expected large crowd in their Castle Road fortress next Saturday. Another bonus point win is the target but Dorchester will certainly have other ideas. Kick off is at 1500hrs.