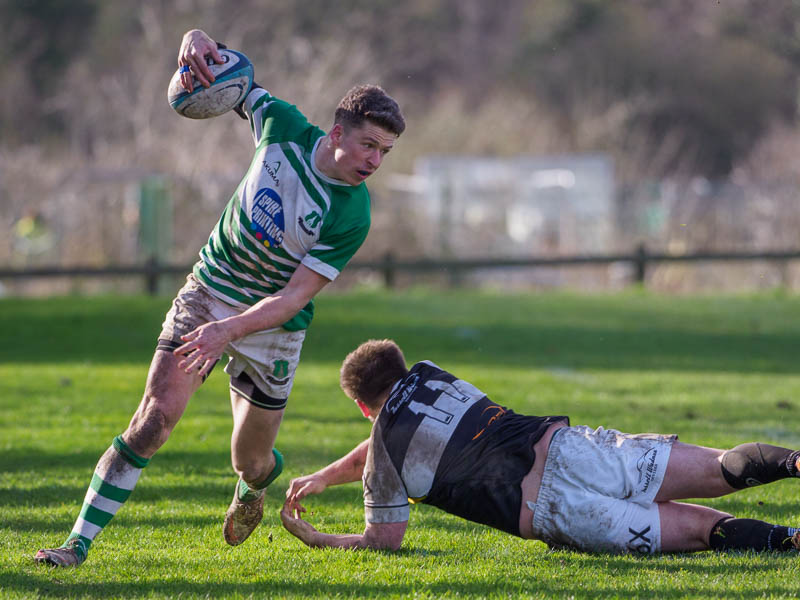 Salisbury made the short trip across the plain for this local derby with added spice as the two sides are locked in close proximity at the top.  The visitors knew that a bonus point win would propel them into the top spot if they could stop Devizes picking up two bonus points.

With the sun peeping through and a large crowd eagerly anticipating the fray the scene was set.

The Green and Whites were first out of the blocks and a swift pass found Will Murley, a flanker deployed on the wing, thundering on to the ball, deft hands saw off the defender and Murley was racing to the line to open the scoring, converted by Tommy Tully.

The game continued at a thunderous pace before No 8 Josh Green held off the defensive tackles to crash over for a second score, again converted by Tully, before Luke Rapson streaked away to pull back an unconverted try for the Saddlebacks.  Both sides continued to probe each other’s defences before a slick move from Salisbury saw Murley pop up on the other wing to sprint home and send the visiting support into raptures.  Tully again kicked the points and a half time lead of 5-21 had the vociferous Salisbury fans daring to dream.

Devizes thundered into the Salisbury defence in the second half using their big ball carriers to good effect, but the vistors’ defence was resolute, Oscar Conroy-Purbrick notching their only score. Given ball to play with Dan Hammond shot clear, stepped the last defender and scored the vital bonus point try.  With five minutes left on the clock and the Saddlebacks throwing everything into attack, Tully intercepted and ran the length of the pitch to touch down under the posts but contrived to miss the conversion.

A lead of 21 points was always going to be sufficient for Salisbury to see out the match for a win but Devizes sensed the chance of Bonus points duly crossing with a minute left on the clock for a score from Joshua Gold converted by Matthew Tinker. The visitors kicked off with the simple task of preventing the Saddlebacks from scoring another, but some poor tackling let Henry May stretch for the line and touch down and with Tinkler adding the extras Devizes had the two bonus points they needed to stay top of the table by a solitary point.

It was a bitter pill to swallow for the city side who have twice this season put Devizes to the sword but they will regroup and aim for maximum points in each of their remaining three matches, they visit Swanage and Wareham and Yeovil away either side of a home tie with Dorchester. Devizes also have three games to play and will have the same goal.  All spectators present will wish both sides well in their quest after a rumbustious and thrilling local derby and season.