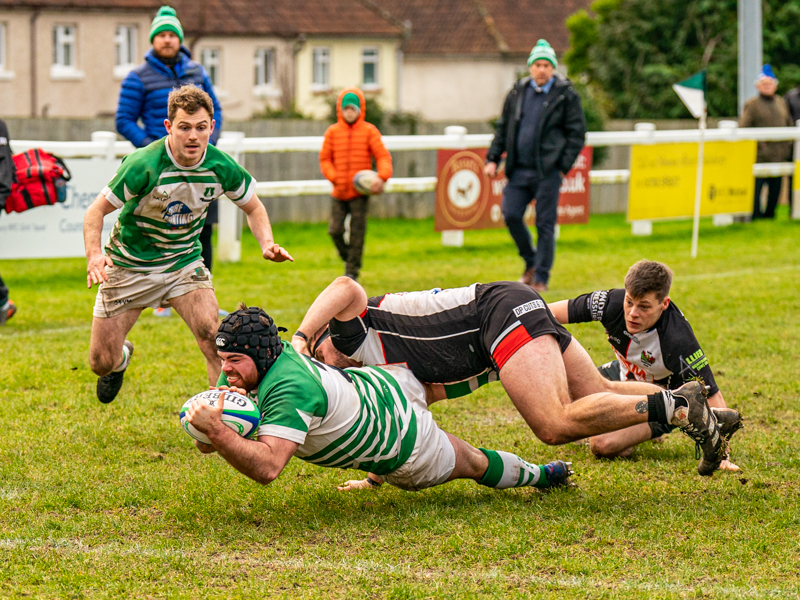 Salisbury flew out of the blocks in their rearranged League game against fourth placed Yeovil.

Showing great dexterity and pace the backline carved open the visitors defence in the very first minute allowing Dan Hammond to step inside the last defender to record the first points before many had settled into their seats. Although the energy had returned since last week’s loss to Wimborne, unfortunately the mistakes hadn’t and failure to secure the re-start gave Yeovil an immediate opportunity to pressure Salisbury and it was only their own profligacy through dropped passes and ignoring overlaps that allowed Salisbury to retain their lead.

However they are playing though, there has been one constant throughout the season for this Salisbury team: the ability to strike in an instant. And so it was when a turnover ball was smartly moved by Ed Crossley onto his half-back partner Blake Ryder who split the Yeovil cover and sent the returning Will Lewin into the corner, followed only minutes later by another sweeping move for Lewin’s second.

The windy conditions made kicking difficult and Salisbury struggled for the rest of the half to establish any field position. Yeovil had a few powerhouse players but playing in narrow channels suited Salisbury and the impressive Max Bishop in the centres, and despite carving many opportunities they failed to convert any leaving the game at 15:0 when the referee blew for half-time.

It seemed the home side needed the break to re-set and a combination of Bishop’s break and quick support allowed Ed Crossley to score under the posts within 2 minutes of the re-start and secure the bonus point. Lewin converted. The game reverted to type with Yeovil having the majority of the possession but unable to breach the hardworking Salisbury defence, despite the best efforts of the dangerous Seni Waqa from full-back.

But Salisbury were tightening up and the forwards deservedly cashed-in when skipper Miles Thompson added what looked likely to be the winning try.

Whether it was Yeovil raising their game, or the home side taking their foot of the pedal, the next ten minutes were decidedly uncomfortable watching for the Castle Road faithful as Yeovil monopolised possession and the scoring. Impressive flanker Drummond going over before Waqa was rewarded for all his efforts to bring them back within three scores.

It was a sensible decision therefore to take the points when they were next on offer, Bishop slotting a penalty to put the game out of sight with six minutes remaining. But that was just enough time for Salisbury to deliver a sucker punch when a Yeovil movement broke down. Ed Crossley bamboozled the defence then delivered a sublime offload to his brother Rob to cross for the final score, converted by Bishop leaving the final score 37-10.

Salisbury remain in second place and will look to reduce their error count and penalties on the training paddock.