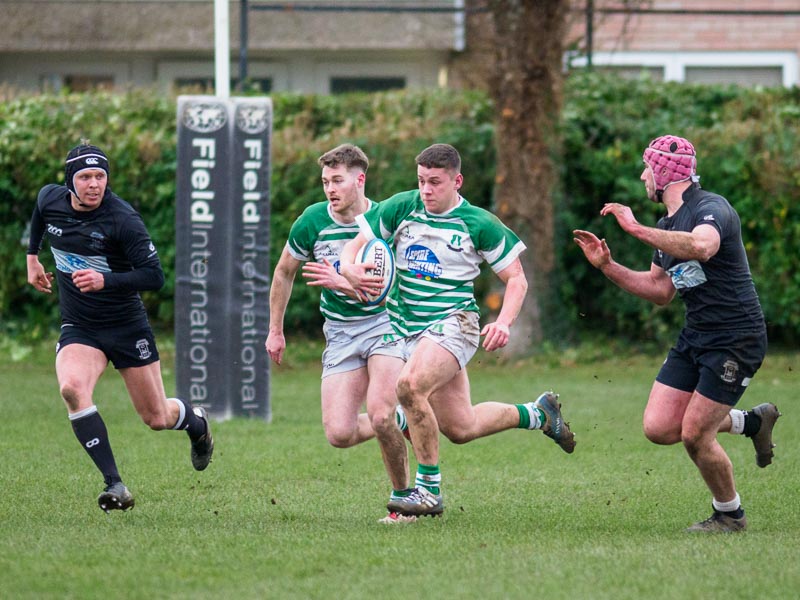 Salisbury’s young tyros have been answering every question asked of them this season, even making light of some atrocious conditions when a more pragmatic approach may have been deemed the more sensible approach.  Visiting Wimborne, never an easy place to pick up points, with late changes to the line-up and the tail end of Storm Malik lashing the pitch, posed yet another difficult problem to solve.

Playing with the wind at their backs, Salisbury were swiftly out of the blocks with the electric Ed Crossley, forced to play at stand-off, initiating a move which finished with Captain Dan Hammond crossing in the corner within two minutes.

The game now became a tense affair with the hosts probing and Salisbury defending well. The smaller, visiting pack were standing strong in the set piece and Josh Green was working wonders at the base of the scrummage to move the ball away from Wimborne’s big forwards.

The visitors’ inexperience perhaps showed in their reluctance to use the strong breeze to gain field position.  When they did use it the rewards were instant, first pressure forcing a penalty converted by Max Bishop, and then Green and Crossley combined and a cross field kick forced a lineout.  Salisbury attacked the ball and drove for the line, try machine Gareth Blackborow rumbling over for the score, Bishop’s boot adding the extras for a fifteen point half time lead.

Wimborne, with the wind behind, looked a different side, and moved the ball well around the pitch with their fullback controlling the game.  Salisbury began to concede points, first through a converted try and then a series of penalties to level the scores.  The hosts were now totally in the ascendant and a score in the corner was enough to secure a home victory.

Salisbury have a week to lick their wounds before entertaining Yeovil at Castle Road in a rearranged fixture.  Their season is entirely in their own hands and they will be looking to breathe life into their challenge in front of a partisan home crowd before the Scotland v England fixture, kick off is at 1430hrs.