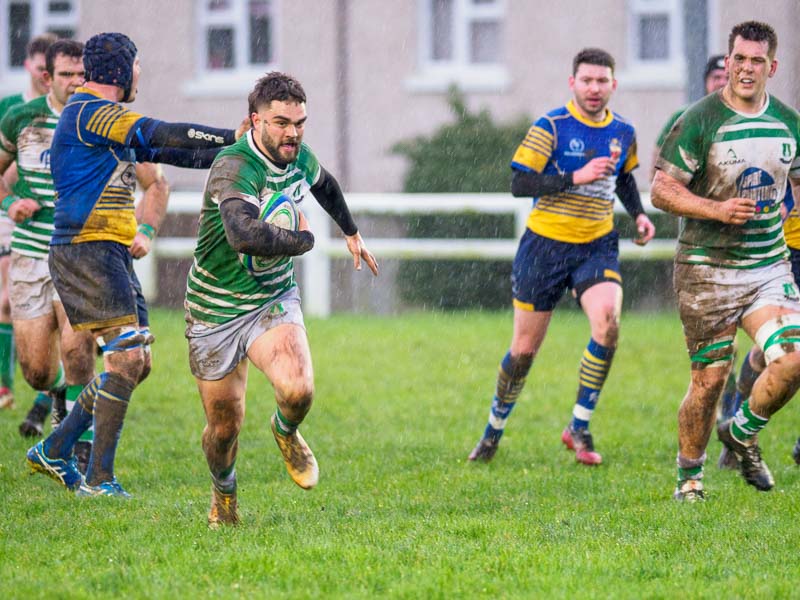 Salisbury have played some glorious rugby this year, moving the ball with ambition to set their exciting back line attack from all angles but conditions on Saturday demanded more pragmatism. It is a mark of maturity from this young side that they got it. Swindon are a good and disciplined side, back in September they inflicted Salisbury’s sole defeat, and wise heads seem to concur that the weather and the mud would suit their game.

The home side started poorly, sloppily failing to deal with the kick off and affording their visitors field position although no advantage was gained.  The match was played at a decent pace and all over the pitch, Salisbury’s tactical kicking into the breeze was woeful but after fifteen minutes Blake Ryder opened the scoring, slicing open Swindon’s defence to touch down, Tom Tully added the extras.

Swindon’s veteran fullback Adam Westall pulled back three points before Tully responded with a penalty to the home side.  Shortly before the break Westall kicked again to leave the match poised at 10-6.

The second half had barely started when Will Lewin fielded the ball deep and set off on a mazy run leaving Swindon’s tacklers wallowing in the mud. As he crossed the try line the large crowd, intoxicated by the fare on offer, roared their approval.  The Castle Road side were now comfortably in charge and despite another Westall penalty it was left to another veteran, try machine Gareth Blackborow, to seal the game with his sixth score of the season.

Coach Jonah Thorpe expressed his pleasure not only at the result but the way it was won. “There were good performances all over the park today” he said, “the boys really put in a shift and must take this forward”.