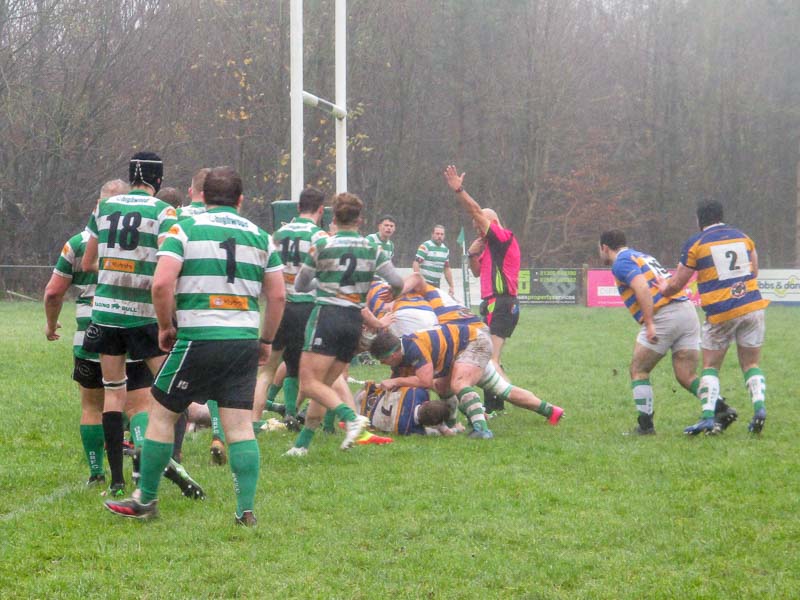 It has been some years since Salisbury last visited Dorchester in a competitive fixture noted the hosts’ programme, in fact it was seven years almost to the day and the visitors ran out 10-67 victors on that occasion.  Since then the fortunes of both sides have risen and fallen and they find themselves doing battle in Tribute Southern Counties South.

The visitors, in their change strip of yellow and blue hoops took just 3 minutes to get on the scoreboard as player coach and talisman Gareth Blackborow burrowed over with Tom Tully adding the conversion. Dorchester struck back minutes later when the Salisbury defence failed to deal with a chip ahead from the wing and let them in for a soft score.

Tully reclaimed the lead with a penalty before Max Bishop made the most of strong pressure to claim a score.  A strong scrummage from the Wiltshire side saw Josh Green pick up and make ground before a perfectly timed pass sent the livewire Ed Crossley scampering to the line, Tully again adding the extras for a 7-22 half time lead.

A fine drizzle continued to fall but Salisbury were fastest back into their rhythm as Crossley added another score seconds into the half, Tully’s boot made the conversion look easy before a well worked move saw full back Jack Gurney cut a fine line to split the defence and go over for a try his industry deserved, Tully’s metronomic boot doing the rest.

An unfortunate injury to Bobby Saunders was brushed aside as both of Salisbury’s try machines, Bishop and Blackborow, bagged a pair apiece to put the result firmly in the bag, Dorchester responding with a try of their own, 14-46.