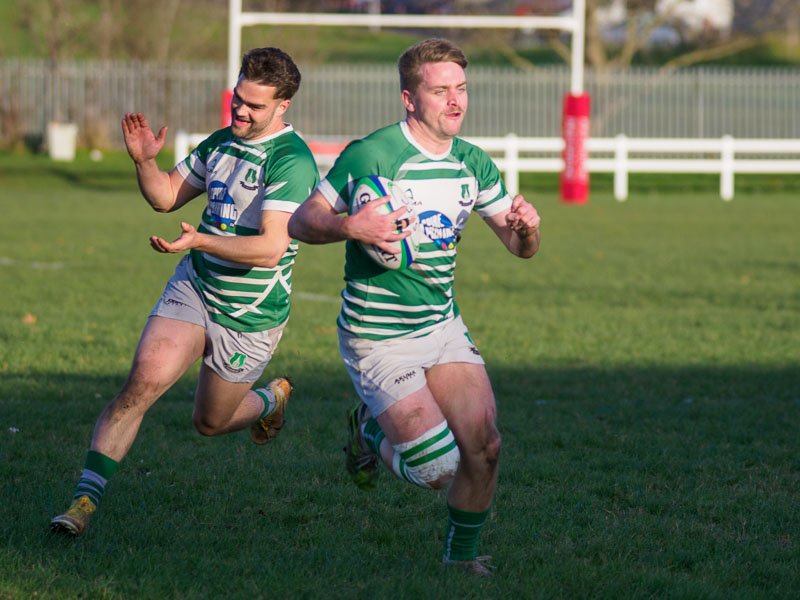 What a difference a week makes!  The bitter northerly wind and freezing conditions were replaced by winter sunshine and a large crowd to watch the visit of the division’s pace setters Devizes who arrived at Castle Road unbeaten.

Salisbury welcomed back Ed Crossley and Alex Park to the side and gave a full start of the season to veteran number eight Josh Green.

It did not take Green long to make his mark and a fine run, scattering the defence around him like the pins on a bowling alley, carried the hosts deep into the Devizes half before a neat offload sent Crossley scampering across the whitewash for the first score; Tom Tully added the conversion points.

Devizes were well represented in the crowd and there seemed to be an expectation that the league leaders would strike back. Salisbury however had other ideas and, with ten minutes on the clock. stretched their lead further when Max Bishop dived over.  It was now one way traffic and Crossley’s quick feet sat the defence on their backsides before a jinking cross field run had Devizes at sixes and sevens. As the defensive cover closed in a sublime and unselfish inside pass gave Bishop the room to grab his second.  Alex Park was rewarded for his industry with the fourth score and the home side had the bonus point in the bag and a half time lead of twenty two points.

Coaches, Jonah Thorpe and Gareth Blackborow, the latter making his 303rd first XV appearance for the Green and Whites, laid down the law at half time, Devizes were not to be allowed a foothold back into the game.  Salisbury duly delivered with George Fossey showing to good effect in the loose, Dom Porter crashing into the defensive cover and William Lewin always a threat from deep. Bishop took only a few minutes to complete his hat trick and it looked like a mountain for the visitors to climb.

With under ten minutes to play Devizes did cross for what was their only score of the game, Tully responded for the city side with a penalty and a 32-5 victory.  Salisbury deserve to be very pleased with themselves for this notable win but must prepare for a visit to Dorchester and then a home encounter with Yeovil before the Christmas break.