The leagues get under way 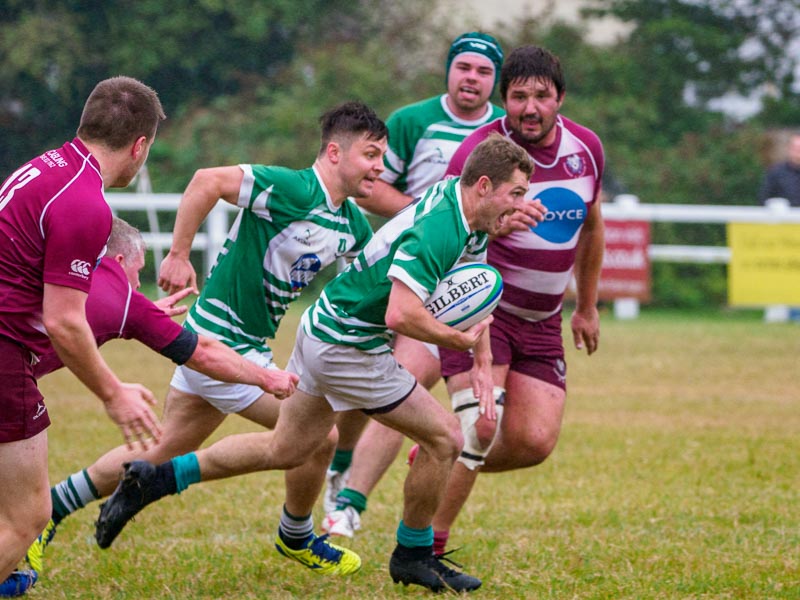 There may have been grey skies overhead, but a large crowd bolstered by a Vice-Presidents’ lunch and the official naming of the new Garth Parsons stand enjoyed the return of competitive rugby to Castle Road. On balance the home side had too much pace for their Dorset rivals, who couldn’t capitalise on their advantage at the set-pieces.

Pre-match withdrawals due to illness saw a couple of late changes to the side, which was already denuded of lock Charlie Kantolina who has started his studies at Cambridge. But the City side were off to a flyer. From the kick-off the forwards harried Swanage and a hacked kick saw scrum-half Ed Crossley score with less than 30 seconds on the clock. Crossley was to play a dominant role throughout the game, sparking many of Salisbury’s best moments and putting in a heavy defensive shift as well. The remainder of the quarter felt like two heavyweight boxers settling into a 15 round bout. Lots of effort saw little gain for either side as the Dorset side struggled to retain possession in the tackle and Salisbury struggled to get their hands on the ball, but fly-half Jack Gurney broke the deadlock with a kick chase seeing Dan Hammond go close, resulting in the first goal-line drop out seen at Castle Road, one of this season’s new law changes. Hammond was now having more influence from the full-back position, but it was Max Bishop who capitalised, collecting a decent kick, he beat his opposite number with power and the remainder of the defence with his pace to extend Salisbury’s lead to 10 points. Not for the last time in the game the kick-off was not captured by the home team, leading to an extended period of pressure from Swanage. But Salisbury were winning the battle of the rucks and with Tom Tully strong in the tackle, Salisbury’s inability to win their own lines-out wasn’t worrying the home support.

The next decisive moment saw another first, the new 50:22 law is designed to create more space for the attacking side, and it was Blake Ryder’s kick that gave Salisbury an attacking position. But the personnel changes meant the line-out failed to function throughout the game, though it was of little comfort to Swanage as Hammond collected a poor kick, danced past several defenders and released Crossley who stepped and sprinted his way under the posts. Converting his own try Salisbury now had a healthy 17 point lead and you could sense the confidence. So it was disappointing that the kick off was again not collected cleanly and the resultant penalty gave Matt Spence the chance to kick the visitors first points and put the teams into half-time at 17:3.

The second half started at a good pace. But a high tackle saw Bishop yellow carded before a smart piece of play and a Gurney kick-pass to the lurking Aiden Gill nearly created the bonus point try. But with all the play in the Swans half and Salisbury’s sharp backs looking dangerous whenever they had the ball, it was only a matter of time before the line was breached. And the man to do that was debutante Ross Bealey who went in under the posts. Crossley adding the extras. The resultant kick-off was again spilled, but in a passage punctuated by errors, Crossley spotted the returned Bishop free on his wing, and released him for what would have been a stunning 80m try, but Swans scramble defence saved the day and threatened to breakout before a Dom Porter thunder clap stopped them in their tracks. Camped in the opposition’s half Salisbury tightened their grip on the game. But it took a moment of cheeky magic from Gurney to get the scoreboard moving again. His chip and catch from halfway seeing him scoot under the posts for Crossley to convert. The remaining 15 minutes was punctuated by injury stoppages and with no further scoring, Salisbury were very pleased to honour Garth with their first League win of the season and 5 league points in the bank.

The United XV were also in League action against Swanage & Wareham, but went down 29:0 on Hudson's Field.