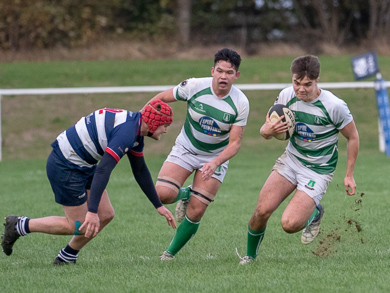 The report on the 1st XV visit to Banbury may be found below...

Salisbury took a side badly affected by injury and non availability to Banbury expecting a stern challenge and were not disappointed.  In front of a large home crowd the hosts opened the scoring within five minutes but failed to stretch their lead and with a quarter of the game gone Dan Luedicke found space and used his pace to score, converting his own try for the lead.

Banbury crossed again but failed to convert and with the clock running down Joe Tully broke a tackle and stepped clear of the despairing defenders to score, Luedicke adding the extras once more.  There was still drama to come as the home side scored a further unconverted try to lead at the interval 15-14.

The visitors had been defending grimly but Banbury had now realised that they held the key in their rolling maul, a tactic they now employed to the full scoring four tries in the next twenty minutes.  The home kicker had now discovered his kicking boots and added two conversions to the mirth of the crowd who were enjoying themselves to the full.

Salisbury were not going to roll over and a try from the industrious Richard Smart was just reward for their efforts, Luedicke maintaining his 100% kicking record on the day.  Banbury finished proceedings off with a final try.

Salisbury now have a week off and it is hoped that activity in the physio room may see the return of key personnel before entertaining Beaconsfield in a fortnight.  To their credit the visitors kept at their task but the home sides experience and size proved too much.