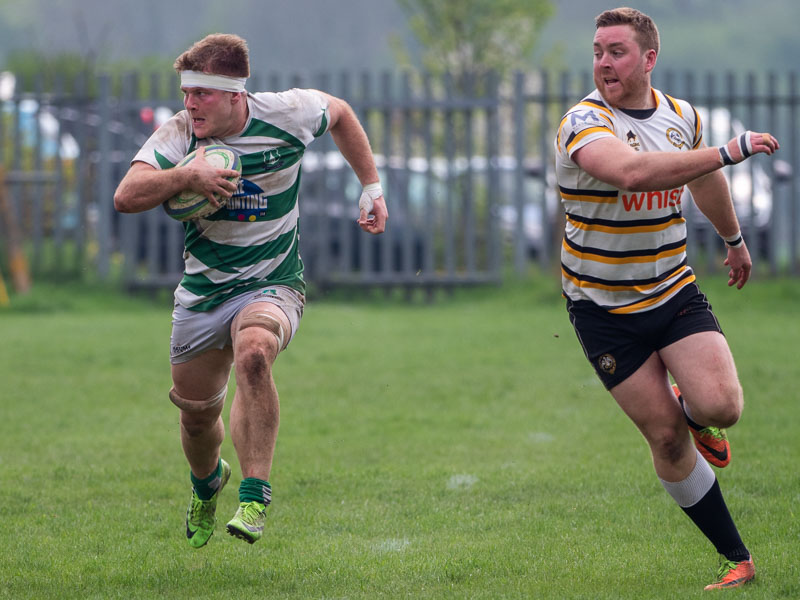 Salisbury’s competitive season drew slowly to a close in glorious sunshine and in front of a large crowd of both home and visiting supporters.  The home side started brightly and skipper Josh Green crashed over to open the scoring after a sharp move.  Ollie Bowden, standing in at fly half was next on the score card and Nik Wotton made no mistake with the conversion, to give Salisbury a 12 point lead within the first ten minutes and, when Green crossed again with Wotton adding the points, an avalanche looked on the cards.

It was difficult to determine whether the home side then took their collective feet off of the gas or whether Marlow finally shook the journey out of their legs because the game became a much tighter affair with Marlow perhaps shading the advantage.  A score for the visitors on the stroke of half time brought them closer.

The first twenty minutes of the second period were played out in much the same fashion before Marlow scored again, this time adding the conversion, to narrow the gap to a solitary converted score.  Skipper Green, enjoying probably his finest game of the season, was instrumental now, making monumental efforts in defence and carrying with intent at every opportunity.  It was fitting that he should cap this with the next score bringing up his hat trick and the bonus point for Salisbury, Wotton converting.

Marlow huffed and puffed and managed one converted score but the home side found that the cushion Green had provided was enough and victory saw Salisbury in 5th place in the division, a position that may drop by one if Old Centralians win their game in hand, but either way it is remarkable given the number of injuries the side has suffered.  The summer brings a chance to lick wounds, rest and ten return to the training paddock ready for the next season.

Salisbury's second team suffered a second heavy defeat as they closed out the season, but contributed throughout the match scoring two excellent tries through skipper Mike Dauwalder and veteran Tom Buckingham. The City side matched their Dorset opponents for long periods of the game, but the greater size and organisation kept the scoreboard ticking in favour of The Dockers. It finished 10-71 but Salisbury competed the full 80 minutes and were never bowed.