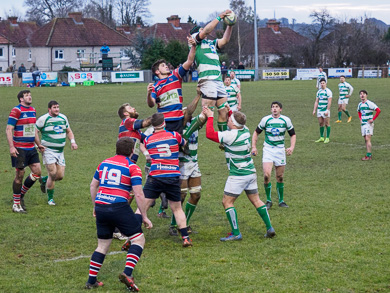 Even the large crowd and festive atmosphere failed to lift Salisbury who turned in a lacklustre performance but still secured a win against lowly Grove.  The first try seemed to hint at better things to come when Matty Loader made the post of poor ball to set off on an electrifying run and slice the visiting defence open.  As tacklers closed in a deft pass saw Christian Metson thundering toward the line for a score converted by Loader.  Grove responded with a try before the kickers traded penalties, Loader notching three to the visitors’ pair, for a half time lead of 16-13.

Salisbury seemed to be playing with more direction after the break and drew away as first Theo Daniel, making his first start of the season, and then Jack Sheldrake crossed for tries.  Two more conversions had the hosts looking nailed on for a win but a second yellow card for Jeff Watt and a period of pressure from the visitors saw them chip away at the lead, two tries and a conversion reducing the margin to five points.  Salisbury huing on for the points but will face a sterner test in Gloucester this Saturday in their final match before Christmas.

Salisbury United shared the points with Bridport in an encounter that sparked into life during the second period. Salisbury looked bright in the opening exchanges, but both sides failed to find any real fluency in an error strewn first half. Departing South African Mitchell Knott-Craig replied to two early Bridport scores before Salisbury started to take control, Richard Knight kicking a penalty to add to his conversion for a 10-12 half-time score. But the second half was a revelation in comparison. Bridport choosing to play very simple, direct rugby, whilst Salisbury started to go through the gears and put some multi-phase plays together, earning tries for Natt Armstrong and Ollie Dykes, both converted by Knight. The United had chances to close the game out and clear their lines late on, but a final Bridport score and a 24-24 draw was a fair result.