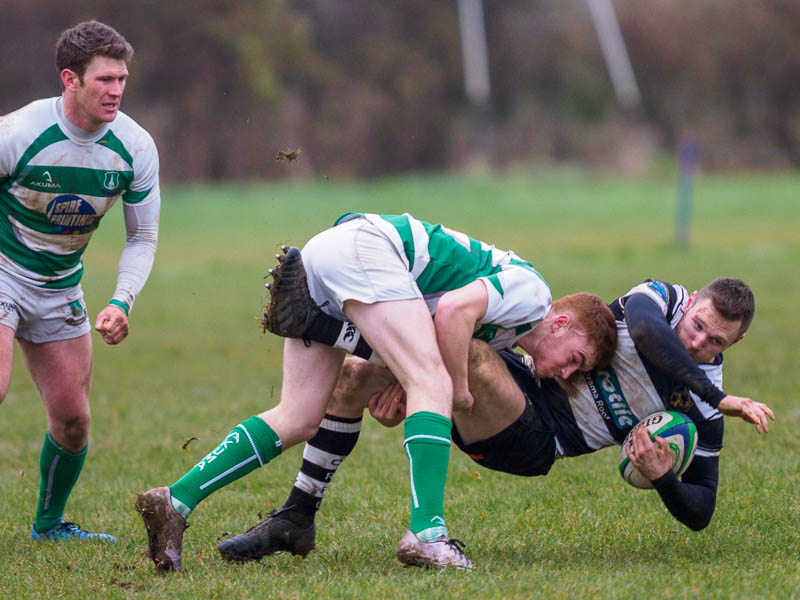 A rapidly growing injury list saw Salisbury field a young and inexperienced back line in this derby game against a big, powerful home side revelling in the partisan support of a large crowd.  Callum MacTaggart switched to full back, Jon Goldsmith moved into the centre where he was joined by Rory Duncan, Dan Hammond returned on the wing and Jack Gurney made his debut at scrum half in partnership with Brandon Akal.

Salisbury started slowly and were behind after two minutes and the hosts then proceeded to keep the scoreboard moving.  The visitors were hampered by two further injuries in the first 15 minutes to Akal and prop Dan Bennett but stuck gamely to their task with locks Richard Goffin and Chris Beaumont getting through a prodigious amount of work.  Jeff Watt was carrying strongly off the base and Gurney attempted to keep his back line involved.  Salisbury eventually scored a try when Gurney tracked the ball carrier and wriggled through a gap for a score with Rory MacTaggart calmly slotting the conversion.

Salisbury added two further tries in the second half as Jared Cardew made an impressive debut from the bench.  First Juan van der Merwe drove over for following good work from the forwards before the McTaggart twins combined with Callum, now operating at outside half, showing great sleight of hand to put Rory, cutting a beautiful line off his wing, in for a score before adding the conversion points himself.

Chippenham running strongly continued to pull away and were the far better team on the day.  The huge defensive effort took its toll as the visitors tired in the second half.

There is no denying that Salisbury were on the wrong end of a big score line but the positives must be drawn from the effort that this young side put in.  Forwards coach Michael Bamsey summed it up saying “It is easy to play when you are 50 points up, when you are 50 points down it requires heart!” and there was plenty of courage on display.

Salisbury will lick their wounds this week and see who returns from the treatment table for the home match with Grove on Saturday.