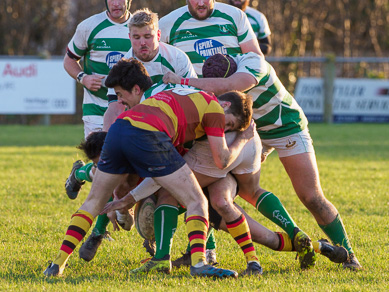 Salisbury’s injury crisis continues to deepen but the reshuffled side still managed a bonus point win to maintain their 100% home record despite a lethargic performance at Castle Road.  Bicester did not resemble a struggling side, starting briskly and scoring through Adam Hall in the second minute.  Salisbury doggedly dug their way back into the game but the visitors still looked the sharper of the two teams.  Good work at a scrummage saw James Hill charge down the clearance kick and scrum half Rob Larcombe dropped on the ball for a levelling score.  Penalties from Charlie Bethell for Bicester and Matt Loader for the hosts saw the half finish 8-8.

Loader nudged Salisbury into the lead for the first time with a penalty and then Hill cut an incisive line to wrong foot the defence and touch down under the posts, Loader adding the conversion.  The industrious Bobby Saunders was the next to score for an invigorated home side, crashing over from short range, Loader again taking the conversion points.  Bicester kicked another penalty, this time from Dan Spencer, before the solid Jack Sheldrake was rewarded with a score deep into injury time to clinch the try bonus point.

Hard work will be done on the training paddock and the physio table this week in preparation for the visit to second place Chippenham.

Salisbury’s second string eased to a comfortable win against Swanage and Wareham after an even first half. An early Mike Dauwalder try after several threatening passages of play seemed to signal a happy day in the winter sun, but Swans had other ideas and scored twice before a Dan Hammond try on the stroke of half-time eased the nerves. The second half was a different matter, with the home side exercising more control whilst posing threats across the team. Hammond opened the scoring followed by Jon Bird and a jinking effort from Jamie Wright. Swans had their moments, but the Salisbury defence and work rate held firm, allowing Hammond to complete his hat-trick before Rory Duncan and Charlie Gentleman crossed, Richard Knight and Wright each converting once. Although Swans had the last word scoring on the final whistle, Salisbury were worthy winners based on the second-half performance.