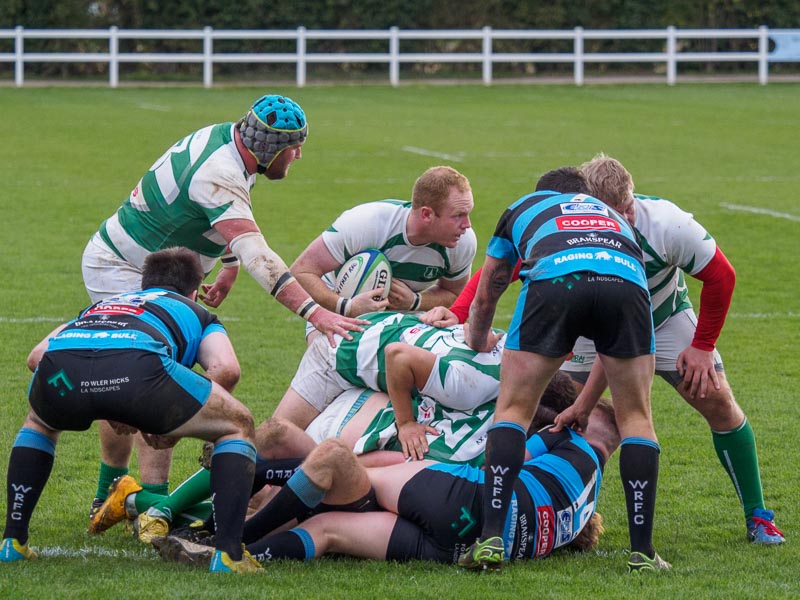 Salisbury were left ruing their misfortune as Witney clinched a one point victory with seconds left to play of the ten minutes stoppage time inexplicably added by the match referee.  The home side, who probably deserved victory over all, had been rocked when Captain Fantastic, Josh Green, had carved a path to the line with seconds of normal time left to give the visitors a four point lead which Matt Loader extended to six with the conversion.  Witney threw everything they had at the visitors’ line but robust defence kept them at bay and when they conceded a penalty Loader’s clearing kick to touch looked to have finished matters.  As the clock ticked inexorably toward Five O’clock Salisbury were penalised back toward their line and, from a scrummage, conceded the vital score, and watched helplessly as the kick ripped the match from their grasp.

Injuries and withdrawals forced Salisbury to shuffle their side and it showed in a disjointed performance. Witney started the brighter of the sides and scored down the left wing after a period of pressure but the visitors responded when Loader made a sizzling break and offloaded neatly for Jack Sheldrake to cross for a score.  Loader added the conversion points and followed it with a penalty. Some poor tackling allowed Witney to run in a score but when Dom Porter was held up over the line, Loader added a further penalty so the sides turned round with the game finely poised at 14-13.

The second half saw Witney extend their lead with a penalty before the metronomic boot of Loader put the visitors ahead.  The hosts looked to have won the game with a drop goal, not a frequent occurrence at this level, before the drama of the last ten minutes unfolded.

Salisbury will lick their wounds, hope that a few players return from the treatment table, and look forward to entertaining Swindon in two weeks time.

Despite picking up two bonus points against the league leaders, Salisbury’s second string will be disappointed with this loss. Whenever The United secured clean possession they looked threatening, but a large number of handling errors de-railed the team giving confidence to a big, physical Wimborne side. A first minute try from Alex Crane-Russell was Salisbury’s only reward in a half dominated by the visitors, until late tries from Rory MacTaggart and Brandon Akal, converted by Richard Knight, meant the home team went into half-time only 17-22 down. Things looked better when a score from skipper Mike Dauwalder seemed to herald the belief that the win was going to come, but handling errors continued to be their downfall, allowing a final Wimborne score close to full-time and a 22-29 reverse.

Some photos from the 1st XV's game away at Witney: