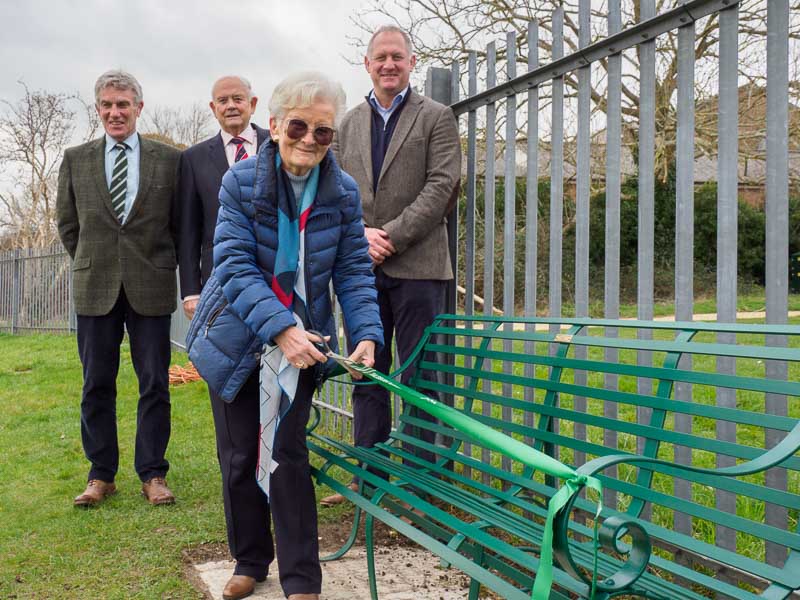 Even if you didn't know Arthur personally, you will know his name from the newly opened changing rooms. Click through to read about this lovely event hosted at SRFC to celebrate his amazing life.

You will gain an understanding of the impression Arthur left on our community, and the World, by the diverse tributes that spanned his contribution to so many lives. Below is but a summary of the ceremony itself that we hope captures his essence and legacy. You will also be able to sit on a commemorative bench positioned just inside the main pitch, providing an excellent vantage point to watch rugby at a Club Arthur served and adored. RIP Arthur G Bowden and our wishes go to his widow Joyce.

Many of his former BWS pupils will enjoy the fact that "Betsy" is now retired and mounted on a ceremonial block. She was not the most welcome of attendees at meetings with 'Titch' Bowden !

Arthur moved to Salisbury at the age of nine from Caerphilly in Wales, and was educated at Bishop Wordsworth's School and Peterhouse (Cambridge) before returning to a lifetime of teaching at BWS. Arthur was a talented rugby player, which alongside a love of the French language inspired his drive to help and motivate young people.

This fed his commitment to Rugby as player and later administrator at Salisbury RFC, Dorset & Wilts RFU and the English RFU itself. His wider associations with both Rotary and Rotaract also included a number of International roles. Somehow he also found time to sit on the Salisbury/Saintes twinning association and act as a guide at the Cathedral. It is fair to say that Arthur Bowden had a lot of energy and commitment.

The informal ceremony was hosted by SRFC President Richard Larcombe and included tributes from all these elements of Arthur’s life. Willie Wildash of Dorset & Wilts RFU and former president of the RFU itself, and Rugby World Cup winner Richard Hill ("The Second" as he is known to Mrs Joyce Bowden) covered Arthur's contributions to rugby. Former BWS, Salisbury and England player Richard Hill "The First" was unable to attend but sent a video tribute from France. Coincidentally both Richard Hill internationals came from BWS, where Arthur was a big influence on them.

Joe Newman and Roger Crisp covered his years teaching at BWS, including memories from a number of his pupils. Rotarians Rod Shipsey and Nick Bell completed the eulogies, with a final video of a young Arthur speaking at a Rotaract event allowing the attendees to remember the man just as he was: humourous, engaging, caring and committed.

The event concluded with Joyce Bowden unveiling a bench by the club's main rugby pitch. It will forever commemorate Arthur's commitment to the club for those watching Salisbury’s rugby teams.