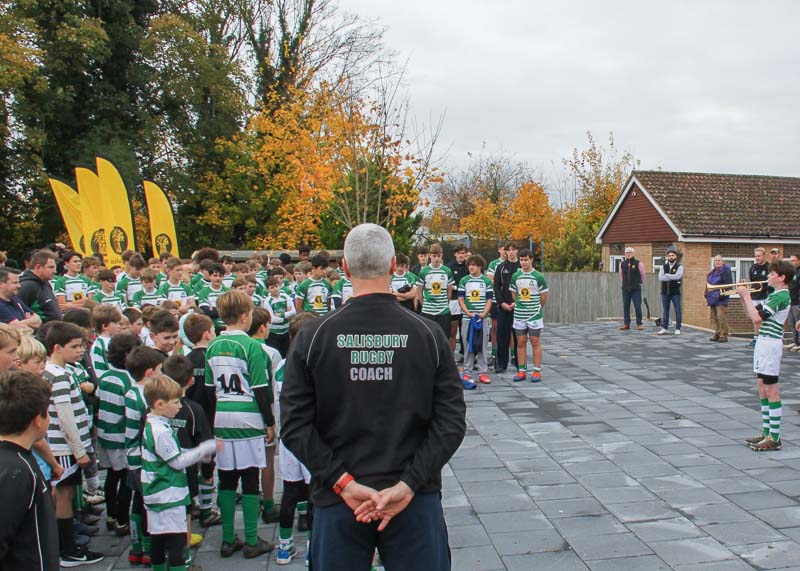 Salisbury Rugby Club hosted three Dorset & Wiltshire Cup matches at Castle Road on Sunday 14th. November. The matches were scheduled to allow the whole club to stand silently for two minutes at 1100hrs, led by an U14 squad member’s moving rendition of the Last Post.

Afterwards, the U14, U15 and U16 teams lit up an otherwise grey day with three scintillating games of rugby. The U14 came away with a 3 tries to 2 win against Supermarine Rugby and the U15s lost narrowly to a strong Devizes side.

The U16s continued their unbeaten record in the competition, defeating a tough Wimborne side 25-19. The game was hanging by a thread as Wimborne missed a last-minute penalty which was gathered by Salisbury and recycled. Quick passing sent Max Goldship racing in from halfway for the winning score.

Director of Youth Rugby at Salisbury RFC, Jason Yarwood said: “Salisbury Rugby Club offers rugby to almost 400 junior boys and girls aged from 6 to 18.  After a difficult eighteen months it’s great to give local children the chance to play team sport regularly,  staying active, having fun and making friends for life outside of their schools.