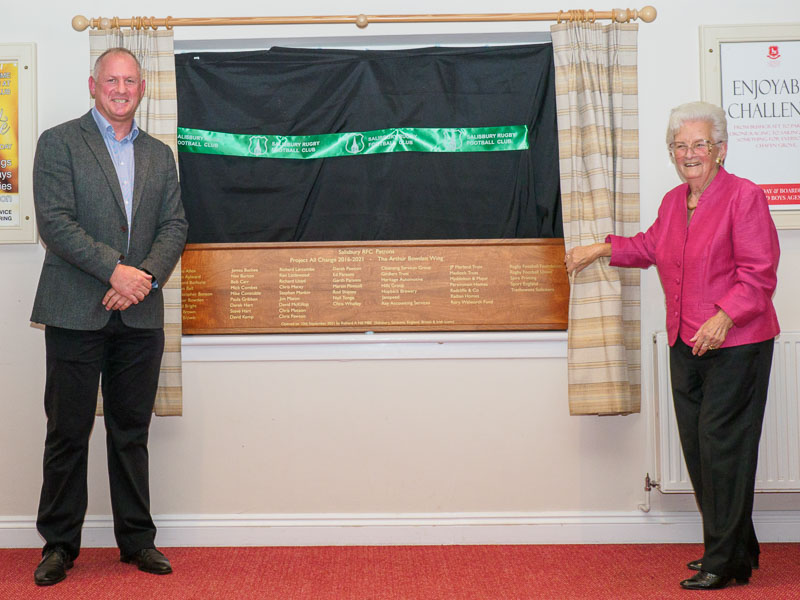 It was a very important evening for Salisbury RFC last Friday 10 September when the Club celebrated the completion of their extensive new changing rooms.

The fund raising of over £600,000 and the building itself took over five years to complete, including frustrating delays due to bad weather and Covid restrictions.

The funds were raised from a variety of sources, including grants from the RFU, Sport England, Community Landfill Tax, generous Club sponsors and donations from many members and friends. Plus of course a variety of fundraising efforts by the Club and its members, including formal dinners, sponsored walks, a Buy a Brick scheme, parties, dances and many other functions at the Club organised and supported by the members and their friends. Further very important help was given during the build by architects, suppliers and contractors working at often far less than their normal rates.

All these contributors were invited to the opening ceremony in the Heritage Suite at Salisbury RFC last Friday when Richard Larcombe, Club President, welcomed over 100 guests and introduced Richard A Hill MBE, a former Salisbury player who went on to play for Saracens, England, and the British and Irish Lions and of course was a Rugby World Cup winner in 2003. Richard had been involved in the project from the start and it was a special moment when he revealed the board naming the changing rooms “The Arthur Bowden Wing”. Arthur, who passed away at the beginning of 2021, was an Honorary Life Vice President of the Club and an exceptional supporter of rugby in Salisbury, Dorset and Wilts and further afield.

Club President, Richard Larcombe said “We are delighted that the Rugby Football Union, The Rugby Football Foundation , Sport England and so many other sponsors, patrons, members and volunteers were able to come together to provide these excellent facilities to support a lasting rugby union legacy in Salisbury and south Wiltshire for men, women, boys and girls to enjoy for many years to come.”