1st XV at home to Trowbridge 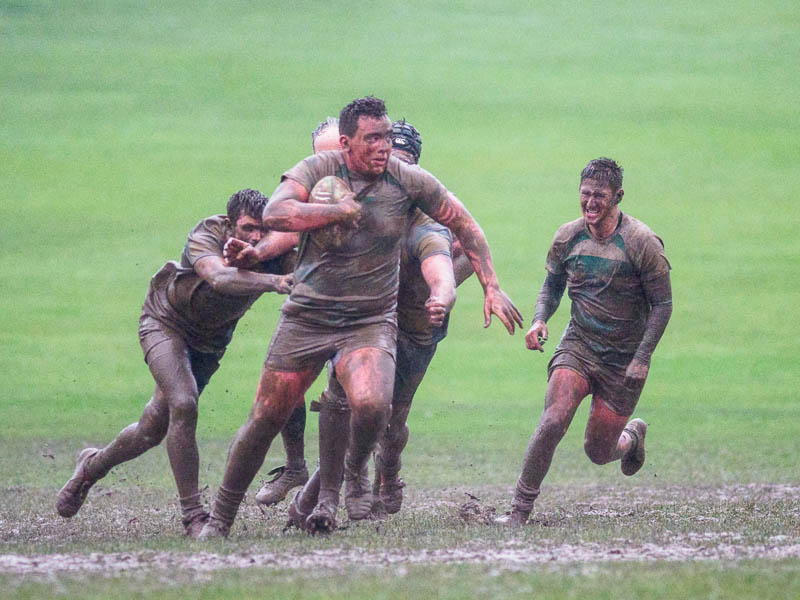 Salisbury hosted Trowbridge on a wet and windy afternoon. Ground conditions deteriorated rapidly after the morning pitch inspection with the game moved to Hudsons Field.

On his 100th 1st XV appearance Mike Dauwalder led the team out for Salisbury to have first use of the elements. Limiting then number of mistakes and taking advantage of any scoring opportunities would have been Coach Jeff Watt's instructions, so it was worrying to see the penalty count against the home side rise followed by an early yellow card for Sam Goldsmith. But the scrummage held out to lift the siege and Salisbury started to find some field position and give Nik Wotton a shot at goal to go 3 points up, closely followed by a second penalty.

The mistakes were frequent but the efforts of both sides were commendable and the crowd were.thoroughly warmed when Sam Goldsmith crashed over after the best passage of play Salisbury put together, converted by Wotton. The 13:0 half-time lead was just reward and quite possibly just enough.

So it was a big blow when Trowbridge burst through a gap just 3 minutes into the second half, which with the conversion drew the West Wiltshire team to within 6 points, closely followed by a second yellow card and a worrying period for the steadfast home crowd. The scrummage was now under pressure and Trowbridge intelligently kicked for territory and built sufficient pressure to squeeze over to bring the score back to 13:12 with 20 minutes remaining.

Back to full strength the home side upped the urgency of their defence creating a form of rugby stalemate that could see a second victory of the season. So it was with a high degree of disappointment that after another period of brave defence one slack pass and a try-line melee ended with an unidentifiable Trowbridgian gleefully flopping over for a converted try.

5 minutes remaining and 6 points down the home side threw everything at their opponents, defying the elements to put together a series of multi-phase attacks, panicking the Trowbridge defence. With the match building to a crescendo Salisbury looked to a final scrum for a shot at glory. But like the weather if ended in a damp squib as the referee left the home team nonplussed with a penalty decision allowing Trowbridge to kick the ball off the park leaving the final score 13-19 and Salisbury with just a losing bonus point.