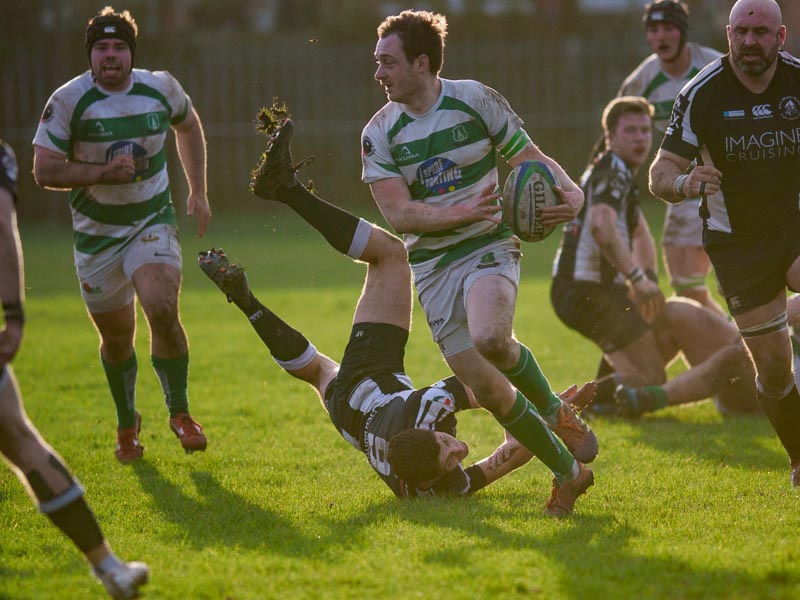 The sun returned, Salisbury fielded possibly their strongest line up of the season, and there was a spring in the step of both sets of players.  The game was preceded by a minute’s applause in memory of East Dorset prop Jamie Davis who sadly passed away the previous week.

Royal Wootton Bassett’s flag has certainly not been flying at half mast this season, and putting events at Windsor behind them, recovered their kick off and mounted a considerable spell of pressure on the home line.  Salisbury’s defence looked better organised than of late and repulsed their visitors before attacking themselves and coming away with a penalty goal lead, the returning Robbie Keith doing the honours.

Bassett responded and scored two tries in fairly quick succession, making the most of the home side’s first mistake, and then added a penalty to lead.  The city side were not to be outdone and Christian Metson, forming a formidable centre partnership with Jon Goldsmith, was able to crash over for a score, converted by Keith and the sides were in touch at the break.

Salisbury were dominant after the break and the at half back Keith was organising and pulling the strings allowing Dave Tonge to vary his attacks and probe for weaknesses.  Tom Bond, in the second row with skipper Josh Green, appeared to cover every blade of grass while the back row of Ant Sturges, Toby Daw and Angus Johnson toiled tirelessly to provide ball.  Reward came when, from another attack, Tonge looked for a gap and emerged from a royal pile up bodies with the ball and a try, Keith once again kicking the conversion to level.  The home side were in the ascendancy, Rory MacTaggart running hard and elusively looking for a score and the front row boys, Mike Dawaulder, Miles Thompson, Triston Avery and Sean Galloway crashing into their opponents with glee.

Sadly pressure was not turned into points and when Bassett were returned to full strength with the return of their player, binned for being naughty too often, they began to exert pressure.  Two tries and a penalty were enough for an away victory and ripped the bonus point form the gallant home side 17-30.

Salisbury’s heads were held high after this epic battle and new lead coach Jeff Watt promised that they would build on this performance for the challenges to come.  Next up are Windsor and the Green and White boys will be looking for that elusive win.

Playing 1st XVs is always going to present our 2nd and 3rd XVs with opponents who will be better organised. So it proved as the game was defined by Oakmeadians disciplined defence in the first quarter, that allowed them to profit when the home side turned the ball over, and two defensive lapses early in the second half that took the game away from the home team. At half-time being just four scores down was not an issue as the United now had the elements in their favour and were winning a fair share of possession. But despite shining in the last quarter, scoring 17 unanswered points with tries from James Gamble (2), Nathan Samuda and a conversion from the evergreen Mark Lerpiniere, those two scores just after half-time presented too high a target despite the spirited finish.

Salisbury Director of Rugby, Richard Lloyd, took pleasure in announcing that “Jeff Watt, who has been with the Senior coaching team since the beginning of the season, will now be Lead Coach with responsibility for the 1st XV. He will be supported by Nik Mould and Mark Lerpiniere as we target a number of wins across all 3 teams to ensure we meet our targets and finish the season on a high, to provide a positive springboard for the 2020/21 season. The appointment is on an interim basis to the end of the season when we will take stock and consider our structure as part of next season’s planning.”