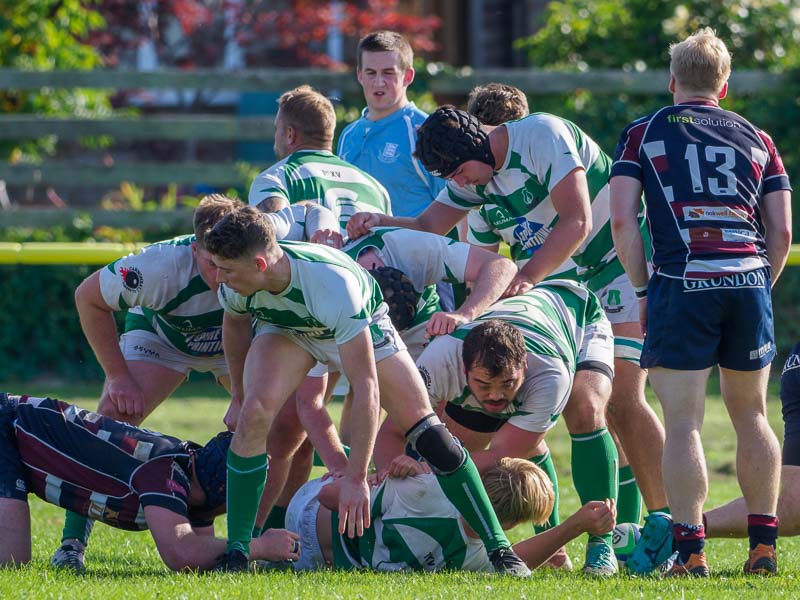 Rugby is an unforgiving game when the opposition are both bigger and better organised. This has been the story of the season so far with Salisbury's young and changing team being able to take the fight to their opponents for 50 or 60 minutes before the exertion takes its toll. So it was again with the trip to Cheltenham to play Old Patesians, who had come down from the higher league last season.

Salisbury chose to play with the slope and a strong wind on a blisteringly hot day and Old Pats immediately set about using their big forwards to batter their way upfield, but it was Salisbury who drew first blood with skipper Dave Tonge, standing in at fly-half, pouncing on a loose ball to weave his way through from halfway for a stunning try. Old Pats responded immediately from the kick-off before settling into a pattern of using the big boys to force Salisbury onto the backfoot before stretching the defence by passing the ball to their outside backs.

Slowly the score built to a 24:7 lead but with Tonge scoring his second individual effort on half-time converted by Rory MacTaggart, and the front-row of Matt Frere, Gareth Blackborrow and Tristan Avory winning their scrummaging battle, Salisbury's travelling support had something to cheer.

But the signs were ominous for the away team when Old Pats drove over from their first second half lineout in the Salisbury 22, closely followed by another to take the lead out to 34:12. With the game breaking up, Salisbury were able to stem the scoring for quarter of an hour, but with legs tiring and their Cheltenham opponents enjoying a considerable size advantage the runes were written and they scored regularly until the final whistle and a 65:12 win.

The transition process that the team are going through was evidenced by the six debutants and five 18 year olds in the side, but that also offers hope for the future and a stronger showing when the return fixtures come around.

Salisbury's second string went down to Weymouth and found themselves in a similar position to the 1st XV. Some weak defence and a 10 minute sin bin allowed the Dorset side to build a match winning lead in the first half. Fine efforts from Atu Vosara and Nat Armstrong were not sufficient to swing momentum towards Salisbury, with Weymouth continuing to score regularly to leave the final score at 59:10 to the home side.

Salisbury's third team were involved in an epic encounter on Hudsons Field.

The visitors came to play and although the home team threatened whenever they had the ball, some slipshod tackling allowed their Hampshire opponents to open up an enormous 47:12 lead. But the home side roused themselves and produced a stunning second half to finally run out 62:59 winners. Tries from Bruno Hallit (2) Rob Becher (2) Alex Swann, Brandon Akal (2) Campbell, one penalty try and 17 points from the boot of Tom Pottage brought Salisbury's Senior Mens teams their first League win of the campaign.

Photos by John Palmer of the 1st XV's trip to Old Patesians: