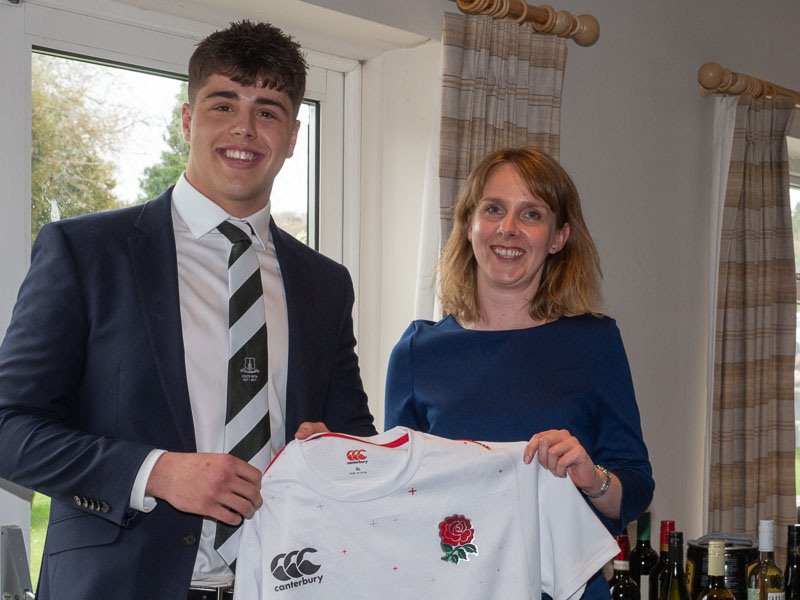 The first weekend of April was busy with the 1st XV against Newbury, the Under-16s against Weymouth and Josh Gray's England jersey presentation

In front of the largest crowd of the season Salisbury produced another fabulous performance against high flying Newbury.  The Berkshire side have won the league at a canter with one defeat the only blemish on their record but their hosts were in no mood to make this a victory parade and set their stall from the off when the veteran Tom Pottage kicked a penalty to open the scoring.  Newbury replied with a slick score before Christian Metson bludgeoned his way over in the corner with Pottage kicking the conversion to lead again.  Newbury replied with a penalty and once again the scores were level.

Xavier Hastings, making his senior debut and putting in a terrific performance fresh from England U18 duty, finished off a good move, running in the next try, the metronomic Pottage again adding the honours.

Newbury now dug in and showed their quality with three well taken tries to lead but Salisbury remained focussed and finished off the half with a vintage try from Pottage.

Two more tries saw Newbury open up a 23 point lead but the home side were still very much in the game, Callum Grant capping a good performance by outpacing the defence to score.  The visitors restored their margin with a second penalty try with five minutes remaining.

Salisbury by now had introduced the seasoned and grizzled old heads of Richard west and Jonah Thorpe to the fray, Blake Ryder had also come off of the bench but despite showing great feet and an eye for a break was removed with a head injury.

The Salisbury faithful were rewarded as the hosts scored twice in the last three minutes, first through the pace of winger Max Bishop and then Pottage, playing like a man half his age, crossed for the final try of the game.

Despite being a reshuffled side once again, Skipper Josh Green being forced to swap the back of the scrummage for the wide expanses of midfield, this was a very encouraging performance and made for a great game.

Salisbury U16 took on Weymouth in the final of the Dorset & Wiltshire Bowl and edged a very competitive fixture 15-10.  Joe Oliver got on the end of a kick through by Charlie Wichary to get the score board moving before Weymouth responded with a try and a penalty to lead.  Man of the match Oscar Bourne brought the hosts level with a try before half time.  The second half was again finely matched but the home pack drove Aidan Grant for the decisive score.

Prior to the first team match Josh Gray presented his England Under 18 Shirt to Chairman Nicola Rawnson.  Josh played his early rugby in Salisbury before moving away but has kept his ties with the club.  He is currently contracted to Gloucester RFC and made his England debut alongside current Salisbury star Xavier Hastings.  Josh is looking forward to competing in the 6 nations for England next month.