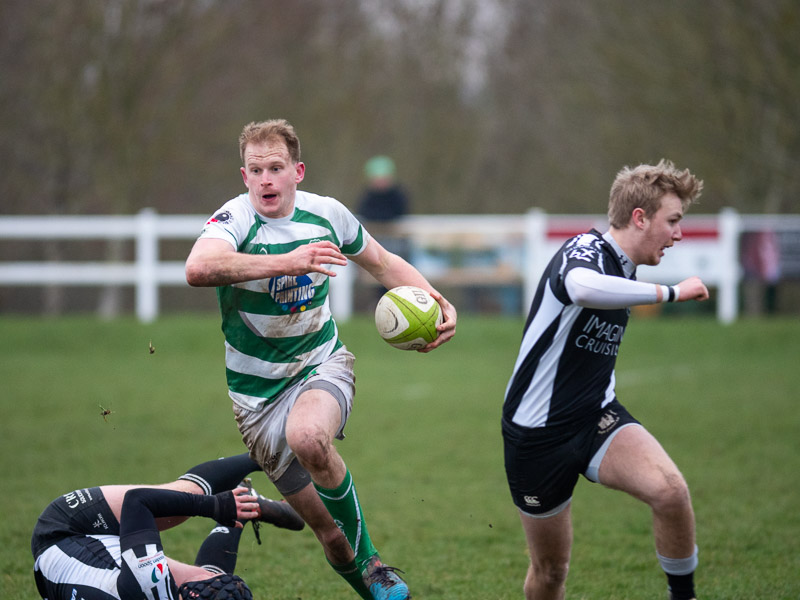 The first weekend of 2019 was a busy one. Here are reports from the 1st XV away at Royal Wootton Bassett, United at home to Blandford and the Colts away to Sherborne.

The 1st XV started the year New Year with a trip to north Wiltshire for the league game against Royal Wootton Bassett. On a cold, still afternoon, for the most part it was a tight, closely-fought game. Salisbury defended well but Bassett were quick to pick up on a few mistakes and turn them into scores.

Bassett were first on the scoreboard with a converted try after 12 minutes, an unconverted try after 20 and another on the half-hour for a 17-0 lead. Salisbury had been defending well and then put some attacks together. From a strong forward drive close to the line it looked as though prop forward Mike Dauwalder was over for a try, but the ref judged it held up and did not allow it.

At the end of the first half a strong attack down the left wing gave winger Max Bishop the chance to drive over for Salisbury's first try out wide. Dave Tonge's conversion from close to the touch-line didn't quite have the legs and the half finished with the hosts leading 17-5.

The third quarter was very evenly matched with strong attacks from both sides being held out by fierce defence. Eventually on the hour mark Salisbury broke the deadlock with a try for Dave Tonge. The conversion from replacement winger Dan Luedicke fell just short. Bassett hit back quickly with a converted try, followed by a penalty to take the win by 27 points to 10.

This Saturday Salisbury travel to Witney who are one place below them in the league, so the result could be crucial in determining the final positions.

The club's second string hosted Blandford. The visitors started strongly, and their powerful set piece saw them lead by 14 points in as many minutes. Debutant scrum-half Lewis Robinson then got Salisbury moving at pace, and a converted try for captian Jake McConnell got them back into the match. A try from Greg Harris, unconverted, left Salisbury well in touch but trailing 12-14 at half-time.

Salisbury came out strongly after the break, and smart work from Tom Pottage and Ant Sturges led to a try for debutant George Bayless. A penalty for Blandford levelled the scores. Two further tries from James Hill and 10 more points from Blandford saw Salisbury win by 31 points to 27. With four tries scored, this gave Salisbury 5 very valuable league points.

The Colts started the year with an away trip to Sherborne. Playing in the highest tier of the Colts league, the team was reinforced by the return of several players following the completion of schools rugby at Christmas. Salisbury started at a fast pace and caught the home side napping, and a penalty from Cameron Mould put them 3 points up after 5 minutes. Sherborne got themselves organised and defended strongly but tries from Chris Chaddock and Sam Goldsmith and a conversion from Mould left Salisbuyry leading 15-0 at the break.

Sherborne came out strongly in the second half and soon had Salisbury pinned in their own 22. With two tries and a convesion they clawed back to trail 12-15, but Salisbury tightened up their defence. A second try from Goldsmith, converted by Mould, gave some breathing space at 12-22. With 4 minutes to go a penalty from Mould tied the game up with Salisbury taking the victory by 25 points to 12.

This was a much improved performance built on teamwork and squad rotation. There is still plenty to work upon but this was a fine start to the tier 1 league.

Photos from the 1st XV's match at Royal Wootton Bassett: