Round up of the Senior Rugby Action

Read the match reports from the opening rounds of the League campaign.

In the glorious sunshine Salisbury put in a very industrious performance but lacked the clinical edge to finish off with a victory.  In front of a good sized crowd the home side were pleased to welcome back Liam Gilbert and Rob Larcombe, both having had the best part of a year our with serious injuries.  Also in the side were Boyd Rouse, returning fresh from duty with the Zimbabwe 7s side, and new caps Ben Stridgeon, Joe Goldsmith and Kyle Hookway.

Salisbury looked to be playing some crisp, attacking rugby but failed to finish off chances.  Skipper Josh Green carried strongly on numerous occasions, backed by veteran Gareth Blackborow. Joe Goldsmith on the open side flank was a thorn in Old Cents side before a knock saw him replaced by Dom Porter who put himself about in his usual robust fashion. At half back Dave Tonge and Rouse were building an understanding, and it seemed as if a score was beckoning but Old Cents were resolute and the home side had to be satisfied with three Rouse penalties making a 9-0 lead before the visitors claimed three points of their own.  A try from a line out saw the Gloucester side ahead at the break 9-10.

Salisbury seemed to go to sleep after half time and three tries from the visitors, each topped off with a conversion, threatened a rout . Gilbert thought other wise and his years of experience showed as he made good ground before feeding Porter who smashed the tacklers before touching down, Rouse converting.  The home side, and support belatedly woke up and good hands saw Callum MacTaggart in at the corner with Rouse again converting from wide.  Old Cents nerves were evident as the home side pressed again and MacTaggart claimed another to leave Salisbury three points short.  Despite pressure the points did not come and Old Cents departed relieved, but deserved, victors.  Salisbury will need to up their act when they visit Oxford Harlequins next Saturday.

Despite an improved performance Salisbury fell to their second defeat of the season at Oxford.  The visitors were patient in the opening exchanges and applied pressure through phases of play but went behind to a breakaway try from a long way out.  Salisbury, playing with the wind at their back, stuck to their task and Rob Larcombe was denied by the referee from a quickly taken line out before, from another throw Mike Dawaulder emerged from a rumbling maul with a score, Boyd Rouse converting.

The Wiltshire side were in the ascendancy and when Rouse fielded a clearance kick he had Nick Wotton outside who fed the outstanding Callum MagTaggart and the flying wing grabbed his third score of the season. The visitors’ 7-12 half time lead was short lived as they again appeared to switch off for a costly period shipping three scores in the process before rallying.

David Tonge reduced the deficit to 26-19, with a try converted by Rouse, but despite late pressure, a further penalty for the home side saw them out of reach.  Salisbury were left feeling that they had left  chances out on the park and could have used the stiff wind to their advantage much better in the first half.

Captain Josh Green rued the missed chances but complemented the Harlequins on their defence which held strong, adding “it will be a tough test next week against local rivals (Royal Wotton) Bassett who have made a flying start”.

Salisbury’s second team put in a fantastic second-half performance against one of the fancied teams in their league, but will rue the first-half errors that left them with too much to do. The scrum was giving away about 2 stone a man, but they worked hard to provide ball for a talented back-line in which young Joe Tully and Greg Harris shone with their running, whilst Theo Daniel saved a number of points with his intelligent defending. A 0-19 half-time deficit was within reach and Tully’s first score, converted by Seb Eades, was well deserved. But a failing shared with their 1st XV colleagues the previous week was playing too much rugby in their own half, allowing Dorset to score twice in quick succession taking the lead out to 24 points. But the home side rallied and Tully scored a second individual effort before a sustained passage of great play saw Eades go over, who also converted both for a final score of 21:31. 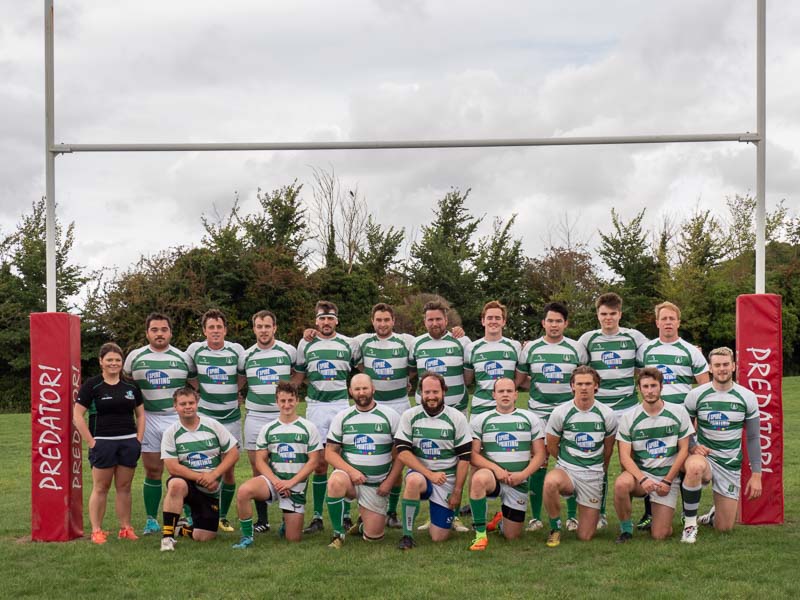