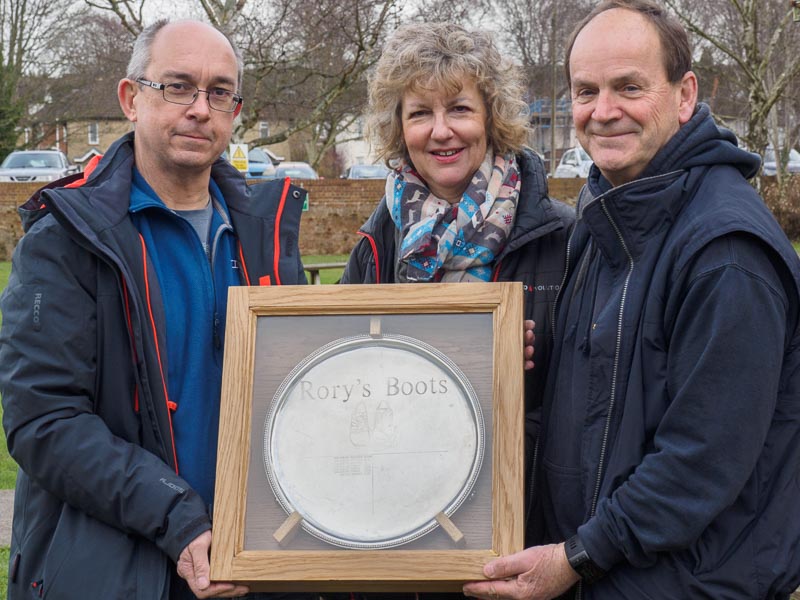 Every Boxing Day the club hosts a rugby match in memory of Rory Walworth.  Rory was a keen player for us and for Bishop Wordsworth's school who lost his life in a cycling accident nine years ago.  The occasion brings together a large number of past and present players for both the club and the school who play a game in his memory.  There is also a bucket collection to raise funds for the development of junior rugby at the club.

This year's drew a large group of players as always, and a decent-sized crowd who braved the elements to watch it.  Referee this time was Rory's cousin Nico Flanaghan who just about managed to keep control of two boisterous teams full of Boxing Day spirit.  The action started quickly with a try in the first minute from Tanks' co-captain Paddy Flood.  Despite sterling efforts from the Rozzas they were unable to catch up and the Tanks ran out winners of a closely-fought game.

Before the game Chris Mann presented Rory's parents Lynn and Simon with a beautiful cabinet he had made to display the "Rory's Boots" trophy.  At the presentation ceremony after the game there was an auction of tickets for a quarter final of the European Cup, kindly presented by Simon Halliday, also a shirt signed by the Barbarian team that played New Zealand in the Autumn, kindly presented by Nick Morris.

The event raised £1,000 for Salisbury Rugby Club to spend on youth development, a great result.

Many thanks to Chris for the trophy cabinet, to Richard Demain-Griffiths and Bishop's school for the match ball and use of the kit for the Rozzas, and to Vinnie, Neil and the staff at the club for giving up their Boxing Days to open up and make sure everybody was well fed and watered.  And special thanks to Nico, along with Paddy and Iain, for organising the first game and working hard to keep the tradition going in Rory's honour.

Here are some of John Palmer's photos from the day.  There is a larger selection of action photos on the club's Facebook page.