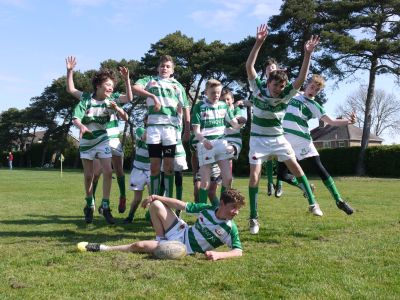 The U13s 7s squad played brilliantly to get to the Plate Semi Final at New Milton on 23 April. Final score 3-4 to Totton after draw at full time.

A squad of 12 played 5 hard matches at the New Milton 7s tournament, and battled relentlessly in the heat and on hard ground. It was the boys' first 7s fixture this year and they showed real grit and team spirit. It was Harry Jones' last match as coach after a very successful year of building and training the squad. The U13 squad is now more than 30 strong, and meant that a good training session was still held at Hudsons Field by Hans.

Well done to all U13s this year - it's been a great success.