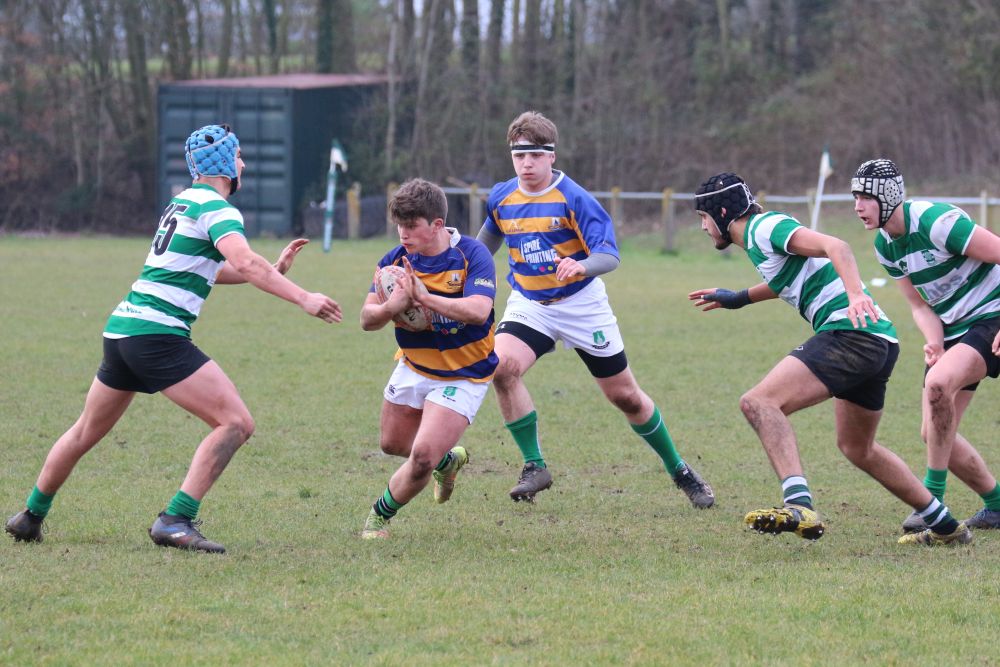 Salisbury Colts travelled to Dorchester for the semi-final of the Dorset & Wilts U18 Bowl Competition. After selecting a full squad of 22 on Thursday the team arrived with a squad of 18 due to a few injuries and late unavailabilities. Dorchester looked well drilled and had a full squad so we knew we were in for a tough game.

Salisbury were metaphorically 'still on the bus' when the game kicked off and Dorchester took immediate control from the kick off. Using their large pack to force Salisbury back, the pressure quickly told as Dorchester forced a Salisbury scrum close to the try line. Salisbury were under pressure but won the scrum and cleared their lines. A few minutes later the situation repeated itself. Again Salisbury won the scrum but this time the Dorchester No. 8 charged down the clearance kick to score the first try after 5 minutes. This appeared to wake Salisbury up. After not being able to get their hand on the ball for the first 5 minutes, Salisbury immediately changed the dynamic and went on the attack from the re-start. It was almost like the teams had changed shirts after the opening try. Now it was Dorchester who could not keep hold of the ball and Salisbury were dominating territory and possession. There was nothing fancy about Salisbury's play but the ball was being taken into contact with support. The clearout was swift and the ball was recycled quickly to enable Salisbury to attack a disorganised defence. The Dorchester defence was scrambling well but couldn't hold out and the pressure told as from a series of forward drives close to the line, Salisbury forced their way over to level the score with Adam Farr scoring the first Salisbury try. This gave Salisbury extra belief and they maintained their dominance for the rest of the half to run in a further 3 tries by Chris Chaddock, Joe Paden and Jacques Kinneson. Dorchester looked dangerous in parts but the Salisbury defence was unrelenting and did not allow Dorchester to create any pressure for more than a couple of phases.

The second half started as the first had finished with Salisbury dominating possession and territory. Although Dorchester had the larger pack, the Salisbury forwards were quicker and more dynamic, forcing turnovers when not in possessions and denying Dorchester any ball. This created a platform to attack and maintain pressure which Salisbury exploited running in a further 4 tries from Euan Flloyd, a second from Jacques Kinneson, Joel Wise and a second from Chris Chaddock. Cameron Mould added a couple of conversions to extend the score line further. Towards the end of the match the play began to break up. Dorchester picked up the pace and Salisbury started to give away a few penalties. Frome one of these, Dorchester took a quick tap and manage to outstrip the defence to score the final try in the corner.

This was an impressive performance by the whole squad. There  is still plenty to work on but the team came together to put in a performance to be proud off.