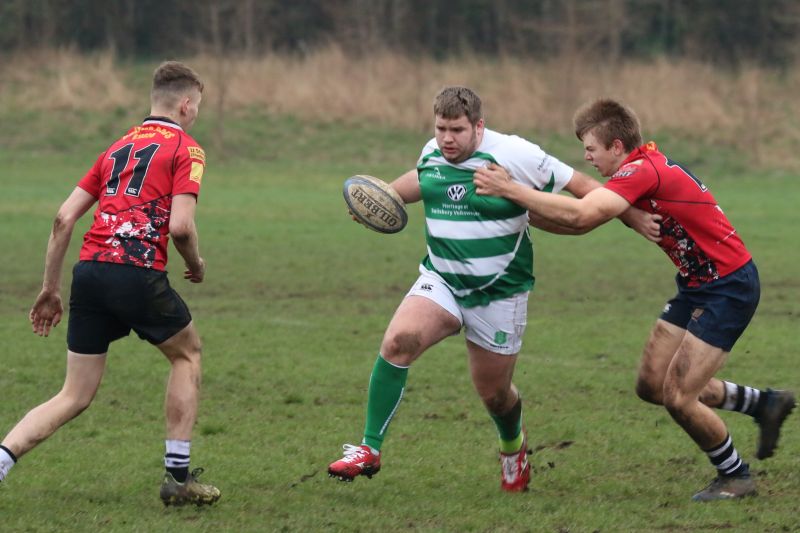 Salisbury played their first tier 1 league game away against Sherborne and won a hard fought match.

Salisbury Colts started their post-Christmas league with an away trip to Sherborne. Although only expecting to play tier 3 rugby following the results of the pre-Christmas round robin fixtures, Salisbury had been asked to compete in the tier 1 league so this was to be a big step up in quality. Salisbury welcomed back several players following the completion of school rugby and were able to travel with a full squad. Knowing that there was a full bench to call upon, Salisbury started at a fast pace and caught the home side cold. Despite several new combinations across the team everything clicked and straight from the kick-off Salisbury drove the ball into the Sherborne half. Salisbury dominated the first few exchanges and were camped in the home 22 when the pressure told and were awarded a penalty in front of the posts. Cameron Mould took the penalty kick to give Salisbury a 3 - 0 lead after 5 minutes. Right from the re-start Salisbury continued their dominance a and pressure on the home side but were unable to break the defence. Sherborne looked dangerous when given the opportunity to break out but the Salisbury defence held firm. Salisbury gradually worked their way back into the Sherborne half and from a period of sustained pressure worked Chris Chaddock over in the corner. The conversion from out wide was missed but Salisbury had a 8 - 0 lead after 15 minutes. The game ebbed and flowed but Salisbury maintained a slight advantage and continued attacking in the Sherborne 22. Sherborne were defending manfully but during one Salisbury break accidentally tip tackled a Salisbury player and g=had a player sin binned. With a slight numerical advantage Salisbury continued attacking and Sam Goldsmith managed to burrow over after 26 minutes. The try was converted by Cameron Mould to give Salisbury a 15 - 0 lead. Despite both sides attacking at every opportunity there were no further scores in the half.

The half time talked provided Sherborne to raise their game and they started the second half just as Salisbury started the first. Sherborne soon had Salisbury penned near their own line. The constant pressure eventually told and Sherborne scored a well worked try in the left hand corner. The conversion was missed but Sherborne had their tails up and straight from the kick-off ran through the Salisbury defence and set up position in the Salisbury 22. The Salisbury defence eventually killed the ball in front of the referee who had no choice but to sin bin a Salisbury player. The numerical advantage and better team organisation enabled Sherborne to score a converted try on 47 minutes. With the score now at 12-15 and still a man down Salisbury looked to be in danger of conceding the lead. To their credit, Salisbury tightened up the defence and refused to concede any more points. After being restored to a full complement Salisbury went back to basics and had Sherborne on the back foot. Several attacks come close but the Sherborne defence held firm until Sam Goldsmith burst through on 60 minutes to score his second try that was converted by Cameron Mould. A score line of 12-22 gave Salisbury a little breathing space. Despite Sherborne throwing everything into attack they could not break the Salisbury defence and it was Salisbury who were attacking as the game drew to a close. With 4 minutes to go, at a breakdown in the home 22, Sherborne strayed offside. From in front of the posts Salisbury chose to go for goal and the penalty was duly converted by Cameron Mould.

This was a much improved performance built on teamwork and squad rotation. There is still plenty to work upon but this was a fine start to the tier 1 league.