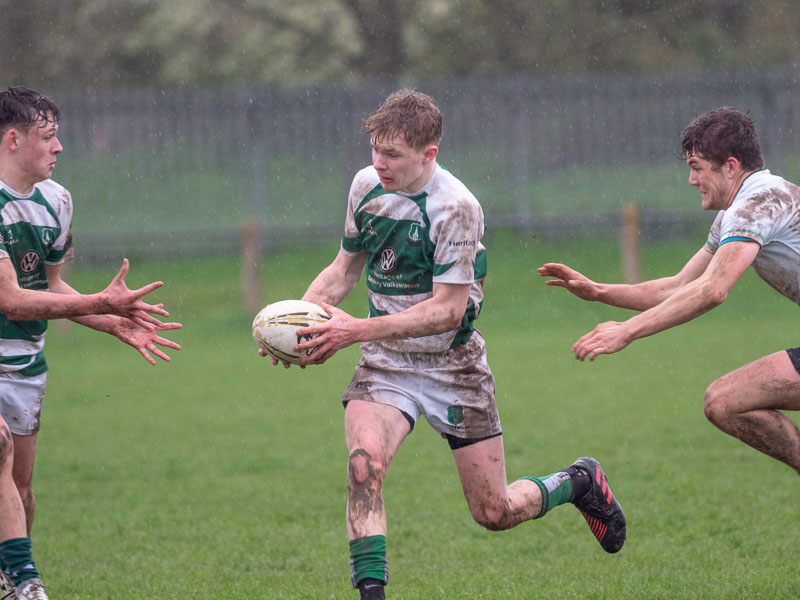 On a miserable Sunday afternoon Salisbury Colts entertained Dorchester Colts. This would be the third time the teams had met with honours being even. The two previous meetings had been played at Dorchester with the hosts winning the first encounter 32-19 but Salisbury winning the second match 33-8. As well as deciding the bragging rights between the two teams this match was also a post Christmas league decider with the winner topping the league table.

Everything was set for a classic encounter except the weather which, after a glorious Saturday had turned dark and wet. Dorchester arrived and looked big and powerful but only had 14 players. It was agreed to play 12-a-side to allow Dorchester some injury cover but it meant that Salisbury had a much larger bench to rotate players.

Salisbury kicked off the first half in miserable conditions with the constant rain making the ball very difficult to handle. Both teams tried to play attacking rugby and although some good phases of play were achieved in the first twenty minutes with breaks on both sides neither team could gain the upper hand. Both sides were disrupted by only having 12 players on the pitch with set patterns of play not being able to be executed because of the lack of numbers. Salisbury rotated several players to try and change the pattern of play but the conditions appeared to be the dominant factor. That gradually changed after the first quarter. Salisbury managed to gain a slight advantage in possession and started to put pressure on the Dorchester line. From a breakdown 5m out close to the touchline, Harry Mould managed to dribble the ball within 6 inches of the touchline and over the try line only to be denied by the referee as he could not see the grounding. Salisbury maintained the pressure and shortly afterwards from a 5m attacking scrum, George South picked the ball up from No. 8 and forced himself over the line for the first score. The conversion attempt from out wide was narrowly missed by Cameron Mould, bouncing the wrong side of the upright.

The Dorchester re-start was skilfully taken by Daniel Jugg on the run. He was quickly tackled by the on rushing Dorchester forwards but the ball was quickly recycled on the Salisbury 10m line. Spotting a large space behind the Dorchester defence, Harry Mould launched the ball deep into the Dorchester 22 with the Salisbury winger Huw Hallsworth hot in pursuit. Huw beat the opposition winger to the ball and fly-hacked in on. The ball went high in the air and looked to be going long but Huw won the chase and touched down close to the posts for the second try. This time the conversion was added by Cameron Mould to make the score 12 - 0. Dorchester then had a man yellow carded for a careless high tackle but Salisbury could not make the most of the man advantage. Indeed this seemed to make Dorchester more determined. Salisbury were trying to apply pressure in the Dorchester 22 when they lost possession. Dorchester seized the opportunity and broke through the Salisbury defence and looked odds on to score with only fullback Cameron Mould to beat. Cameron stopped his man, the Salisbury defence re-grouped and half-time arrived with the score at 12 - 0.

Dorchester kicked off the second half with conditions improving. The rain had stopped but the ground was still very wet and the ball difficult to handle. This did not deter either side who still tried to play attacking rugby. The pattern of play followed the first half with neither side dominating play. Both defences were on top but Salisbury managed to play the majority of the game in the Dorchester half. Clever movement of the ball saw Tom McFarland break through the cover defence and race away to score Salisbury's third try. The conversion was missed but Salisbury now had a commanding lead 19 -0.

Although Dorchester looked dangerous at times the Salisbury defence stood firm. Dorchester worked a 3 man overlap but winger Giovanni Capitano made a superb tackle on the ball carrier to snuff out the danger. Salisbury line defence forced a turnover and the ball was cleverly worked in mid-field to put Tom McFarland through a gap. Dorchester still had numbers in defence but excellent support running from Cameron Mould and a perfectly timed pass saw Cameron run in Salisbury's fourth try under the posts. Cameron converted his own try to make the scoreline 24 - 0.

To their credit, Dorchester never gave up and were determined to get something on the scoreboard. From a penalty for an accidental high tackle just outside the Salisbury 22 they elected to kick at goal. The kick was missed but Salisbury were unable to clear their lines. Dorchester forced a turnover and kept pressure on the Salisbury line. The pressure eventually told and small gaps started to appear in the Salisbury defence. After several probing runs the ball was recycled quickly and Dorchester ran in under the posts for a 7 point score making the scoreline 24 -7.

Salisbury were determined to have the last score and chased hard after the re-start eventually forcing a Dorchester error. Salisbury maintained possession, working the ball left and right across the pitch to stretch the Dorchester defence. Eventually the ball was worked to the right, the ball was quickly won from the breakdown and with Salisbury support players flooding to the blind-side drawing the defence, scrum-half Charlie Smith spotted the gap and darted through from 10m to score Salisbury's 5th try. The final conversion was added by Ben Richards to make the final score 31 - 7.

This was the last league game of the season and it is a credit to all the players the progress that has been made. There were a number of injuries and non-availabilities throughout the season but the team pulled together with great spirit and commitment and never let their heads drop. Even when being beaten heavily, the spirit remained to keep playing and score the last two tries of the game. The whole squad deserves credit and should be rightly proud of themselves. We wish those moving to senior rugby next season our best wishes and look forward to seeing the rest in Colts rugby next season.