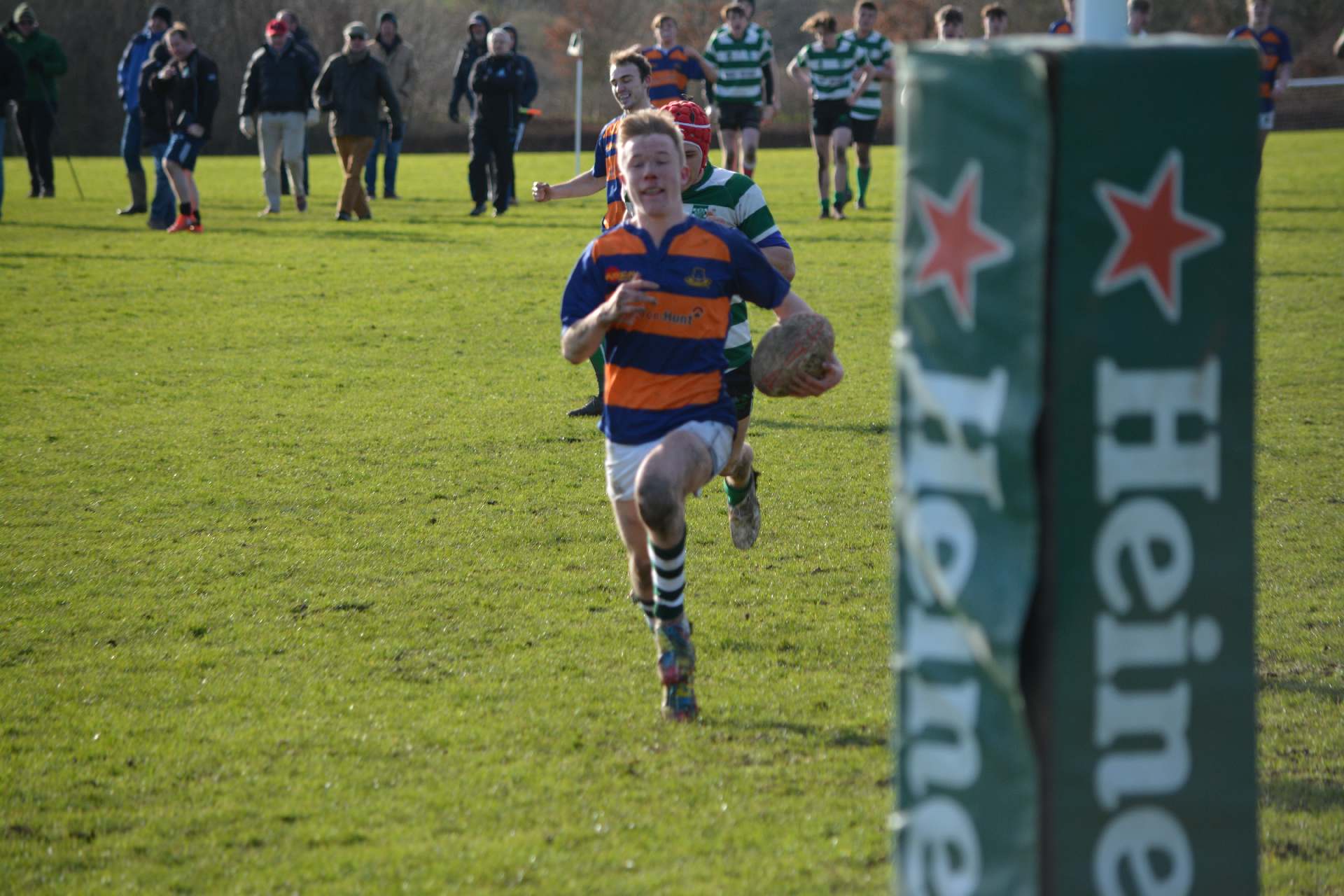 On a bright Sunday afternoon, Salisbury Colts travelled to Dorchester for a re-arranged league fixture. The teams had met earlier in the season at Dorchester when Salisbury were beaten 32-19, but the team had improved since then. This time Salisbury travelled with a full squad and arrived in confident mood.

The game was to be played on a local school pitch close to the club house and the pre-match warm up went well despite the bitter cold. The teams came out for kick off and Salisbury knew they were in for a tough afternoon. The Dorchester side looked big and powerful and they too had a full squad to allow for rotation of players. Salisbury faced the kick off, facing up the hill and a gale force wind and despite a small snow flurry collected the ball and immediately drove up field at Dorchester. With the backs and forwards combining well, Dorchester could not get their hands on the ball a Salisbury gradually made ground towards the Dorchester 22.It seemed that Salisbury had total control of the ball for the first 5 minutes and kept driving close to the breakdown. This eventually pulled in the Dorchester cover, spotting the narrow defence Salisbury let the ball down the back line for Cameron Mould to outflank the cover defence to score from fullback. He then struck a superb conversion from the 15m line against the gale force wind to leave Salisbury leading 7-0. From the restart Salisbury continued the pattern of play but stout Dorchester defence prevented Salisbury repeating the score. Dorchester began to gain a foothold in the game and maintain some possession and from a Salisbury offside near the halfway line kicked a monster of a wind assisted penalty to bring the score to 7-3. Despite both side pushing hard there were to be no further scores and Salisbury led at half time 7-3.

With the wind at their back and running downhill in the second half Salisbury felt confident. Dorchester had other ideas and started to use their big ball carriers to make ground against the wind. Dorchester did not have quite the same level of control and Salisbury were able to use the wind to kick long down field to relieve the pressure. One such clearance kick saw Salisbury follow up in numbers to put pressure on the Dorchester defence a enable a turnover. Once close to the try line Salisbury maintained composure with several drives before passing the ball to fly half harry Mould to crash over close to the posts. A successful conversion from Cameron Mould made the score 14-3. Salisbury seemed comfortably in control but Dorchester had other ideas. Dorchester were controlling the ball and maintaining pressure on the Salisbury defence that had to rely on clearing kicks to keep them at bay. From deep in their own half Dorchester ran the ball with a clever dummy from the fly half and a flat pass to the centre taking the ball at pace. The centre carved his way through the midfield and wrong footed the Salisbury full back to score. The conversion was missed but now Dorchester were within a single score at 14-8. This gave them renewed energy and they started controlling the ball and working their way into the Salisbury 22. Just when it looked as though they had created an overlap a loose pass was intercepted by Tom McFarland who ran the length of the pitch to score under the posts. Another successful conversion from Cameron Mould mad the score 21-8. Salisbury managed to regain some control after this score and looked the more likely to score. From a breakdown on the Dorchester 22 Salisbury worked the ball right. Cam Edley took the ball into contact near the line and off loaded superbly to Huw Holdsworth to score in the corner. Another successful conversion from out wide by Cameron Mould saw Salisbury comfortable at 28-8. With the last few minutes of the match remaining Salisbury again worked the ball down the right hand side and quick ball from a breakdown near the Dorchester line saw Matt Hick loop around and, receive the pass and dive into the corner. This time the conversion was unsuccessful leaving the final score at 33-8.

The whole squad played their part in this victory and it is a measure of how far we have come as a team from the start of the season. There were too many outstanding performances to mention and everyone made a significant contribution, whether starting the game or coming on as an impact player.