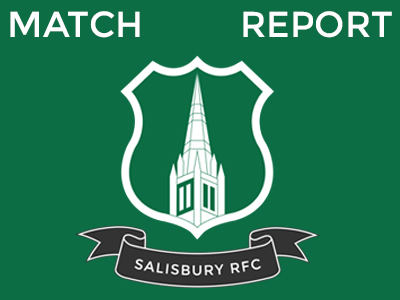 The Salisbury Under 14s travelled to Oakmedians on 12 November for a friendly in bright sunshine. Play looked quite evenly balanced for the first 10 minutes with both sides attacking each other’s try lines without success until Byron fielded a high clearing kick and ran round the defenders to score in the corner.

Despite the presence of some big units in the pack Salisbury scrums dominated again putting Oaks on the back foot. After a try saving tackle by Byron, some elusive running by Leo and powerful carries by Danny, Dylan and Fraser O’G, Oaks number 13 broke through and Byron could only just tap tackle him as he crossed the 22. He managed two or three more strides and just as it seemed he was going to topple forward he got a lovely ball away to their 12 in support who dotted it down. Five all at half time.

The second half started in similar fashion with play going backwards and forwards until Byron broke a couple of tackles and ran in to score under the posts, which he then converted. Oakmedians continued to look dangerous and despite a try saving tackle by Charlie, on the next phase they pushed over to touch down. With minutes to go Oaks turned the ball over at the ruck and began a quick attack but a lofted pass was picked off by Callum K, who ran in to score Salisbury’s third to make the final score 17:10 to Salisbury – a well-deserved win. Leo was lively on debut at nine in the second half, Joss was players’ player and Oaks coaches’ player was Byron.

Apologies no images for this match.