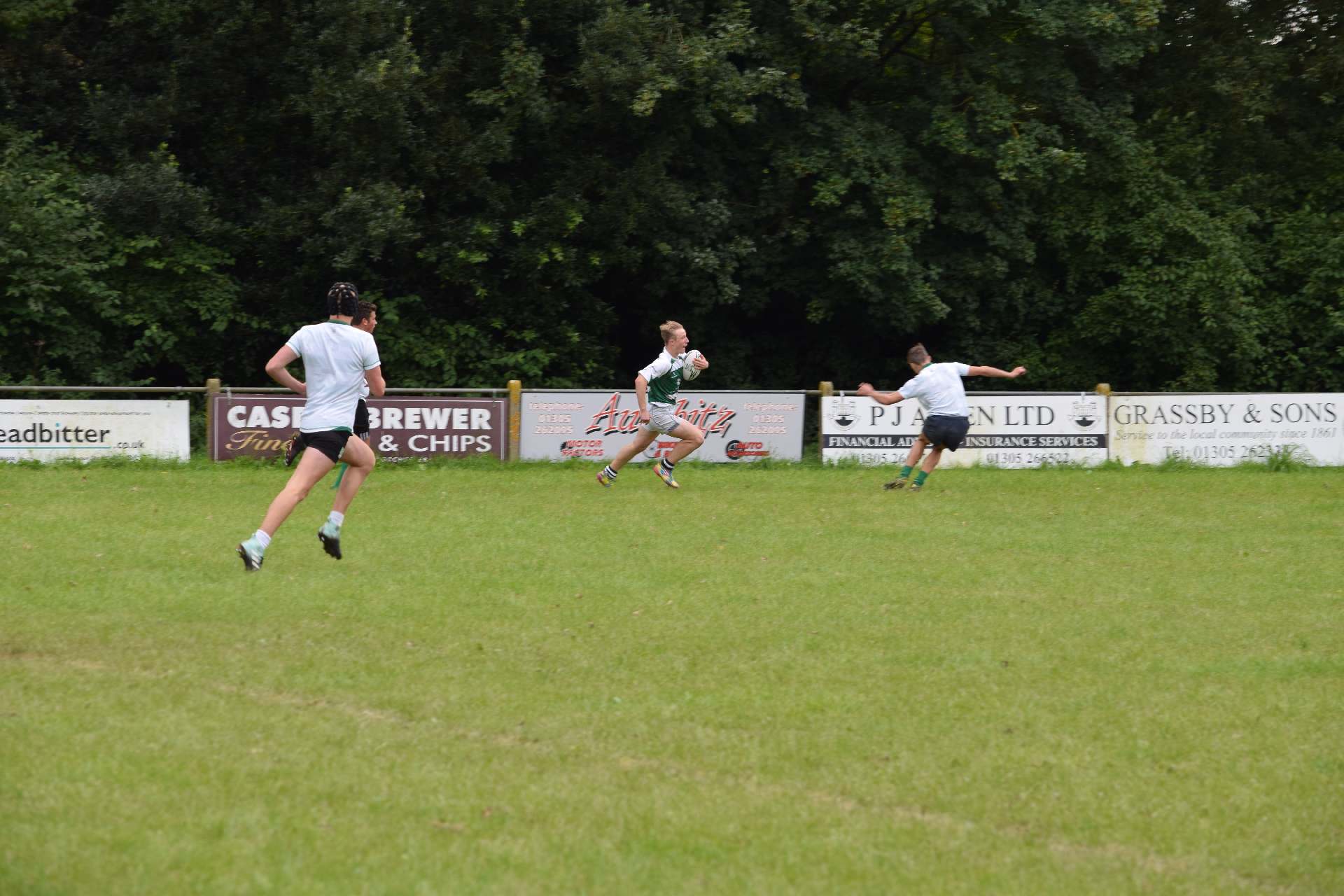 Salisbury Colts travelled to Dorchester on Sunday for the first round of the county cup competition with a bare fifteen players, with several of the team having to play out of position. Dorchester kick off and immediately put the away side under pressure. It looked like it was going to be a long afternoon for Salisbury with Dorchester having the majority of possession for the first 10 minutes. Salisbury's defence held firm but Dorchester continued to attack. They tried a chip over the top deep into Salisbury 22 that was expertly fielded by Tom Mcfarland playing at fullback. He evaded the on-rushing chase and saw a gap up the touchline to break out of the 22 and all the way up to the home 22. The Dorchester cover defence came across but the Salisbury support had reacted quickly and Tom offloaded inside to Bobby Spiers who ran in under the posts fo an straightforward conversion.

Immediately from the restart Dorchester were on the attack again but again the defence was holding firm. Frustrated Dorchester tried the chip over the top again. In almost a carbon copy of the first try, the chip was fielded by Tom Mcfarland who set off up the touchline. This time he outstripped the cover defence to score himself under the posts. Cameron Mould scored the conversion.

Both sides were trying to play open expansive rugby but both defenses were holding firm. Salisbury managed to put several phases together and worked their way into the Dorchester 22. Repeated attacks close to the break down drew the Dorchester defence allowing a quick ball to be passed along the back line to enable Jaylen Smalley to squeeze into the corner. The conversion form out wide was narrowly misssed.

Dorchester, realising they had the bigger players and an advantage in replacements now started to play a tighter game. This change in tactics immediately started to bring rewards. Despite a huge defensive effort, the pressure eventually told with Dorchester forcing their way over from a ruck close to the line. Dorchester now had the game plan and momentum and in the last few minutes of the first half repeated the formula to score two more tries and kick a conversion.

The second half started as the first had ended with Dorchester applying pressure from the restart. Despite the shift in momentum Salsibury continued to play with enthusiasm and committment and put Dorchester under considerable pressure with the centres running hard and straight to punch holes in the defensive line. But momentary lapses in concentration causing the attacks to breakdown allowed Dorchester to releive the pressure on several ocassions. This allowed the opposition to gain field position from which they created space in the tiring defence to score three more unconverted tries.

Salisbury did not let their heads drop and gave everything to try and break the Dorchester line. Salisbury were attacking right up to the final whistle and were desperately unlucky not to score. With the last attack of the game Salisbury drove forward into the Dorchester 22. The ball was kept alive and after several phases Salisbury crossed the Dorchester line only for the ball to be held up over the line.

All players can be proud of their performance in this game. With many playing out of position, the team worked well together and put right a lot of errors from the previous week. the lineout functioned well, the breakdown was cleared out quickly, the support play was close and the communication was excellent.