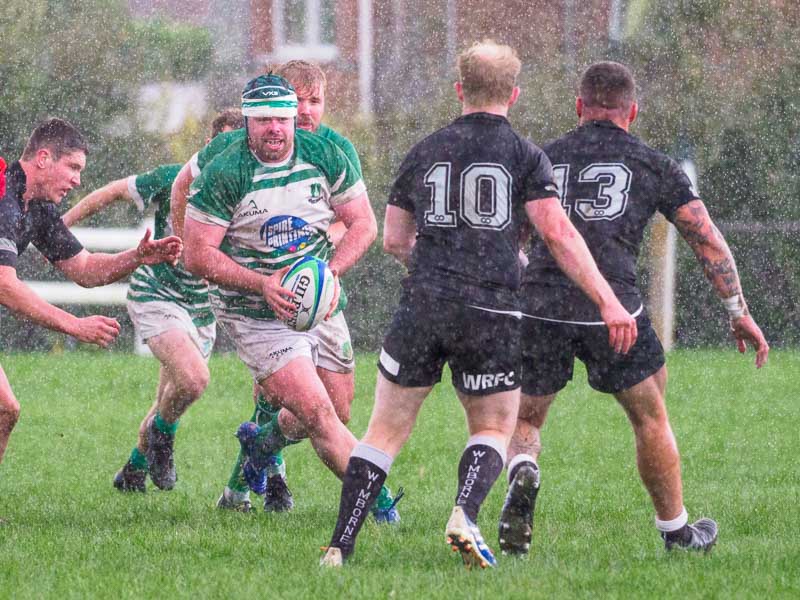 Salisbury’s backs proved too sharp for the visiting Wimborne side as the Green and Whites recorded another emphatic league win 39-5. In front of a large and extremely knowledgeable crowd. The game kicked off at a fair pace, with both sides looking dangerous ball in hand, but Salisbury managed the first score from Will Lewin on two minutes, profiting from the smart running lines and hands of his inside backs.

Wimborne were an experienced side and posed a lot of questions for the home defence in the first quarter, striking back on the five minute mark to bring the score level when centre Gavin Maltman cruised over after a series of attacks within the 22m area. Salisbury were gradually gaining the upper hand with the much improved set piece giving this exciting back division good quality ball, and in the main making the right decisions when to attack or play for territory. It was another newcomer to the team that put Salisbury back into the lead, winger Perry Houston scoring out on the right converted by Lewin, who then crossed for his second shortly following smart play down the blindside by the fizzing scrum-half Ed Crossley.

Wimborne were struggling to get much traction as the increasingly influential Josh Stace and his fellow forwards were bossing the physical exchanges. The pack were rewarded after another slashing break set-up by Jack Gurney and Blake Ryder, before the forwards provided the finishing muscle for Stace to reach over and score under the posts, converted by Lewin. Stace finished the scoring on the stroke of half-time following sharp work from Gareth Blackborow to send Salisbury in 29:5, profiting from a smart break by Gurney.

The home side picked up where they left off at the start of the second half with Max Bishop going close after a long-range breakout, before Houston crossed on the opposite wing for his second of the day. At this point the weather had its say, some heavy rain slowing the momentum of the game. Although the scores dried up, there was a lot for the purist to admire as both sets of forwards set out to wrestle control of the game in the worsening conditions, but Miles Thompson and his team continued to back themselves and seem to be growing in confidence as the season progresses.

Once the rain had passed the game began to open once again, and although both sides threatened on a number of occasions the home support had to wait until the final minute for Houston to cross for his hat-trick and put some deserved icing onto a well-deserved victory.

Salisbury United recorded a first victory of the season travelling to visit Bridport 1st XV and coming home victorious under the leadership of Scotty Nicholl.