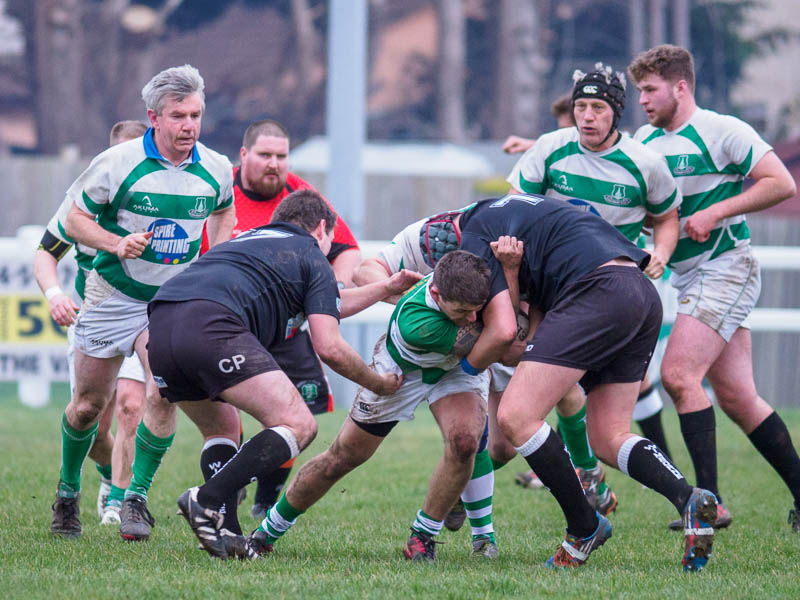 High flying Oxford took on Salisbury on their 4G playing surface in extremely windy conditions which made things difficult for both sides but produced an exciting display.  Quins drew first blood but the visitors produced a strong spell of pressure and forced the hosts to defend on their five metre line. However, after securing possession the home side were able to drive out from danger and run the ball from deep, only one tackle being completed and finished scoring under the posts.

Salisbury continued to play well and were unlucky when a high kick swirled in the wind causing confusion for both sides but Quins retrieved it and the retreating forwards seemed to block the tacklers as they ran in the final score of the half.

Captain Richard Smart obviously had strong words for his troops as some good play saw the visitors besieging the home line and Mike Dawaulder crossed for the points.  Fortunes swung back and forth but Salisbury seemed to have fallen foul of the referee and were continually penalised allowing Oxford to relieve any pressure and play the game in the opposing half. Three score followed for the Berkshire side before Salisbury again bothered the scorer when Smart, capping a fine performance scored, Rory McTaggart adding the extras.

A failure to tackle led to Oxford Harlequins running under the posts untouched for a final score and conversion, and a scoreline that did not reflect the effort put in by the visitors.

Salisbury played well in difficult conditions for much of the game.  One is left to wonder if the failure to turn performance into victory is now psychological. Another tough game beckons in the shape of Wiltshire rivals, and promotion hopefuls, Wootton Bassett next Saturday.  The coaches will be looking to build on these green shoots for that elusive victory.

The United XV won away at against Swanage & Wareham II 22-24.

On a windy (and smoky) but thankfully dry afternoon, the visitors bossed the early exchanges. Wimborne kicked off and regained possession and laid lengthy siege to our goal-line. We defended well, but eventually after 10 minutes or so they found a way through and scored a try, unconverted.

We then got back into their half. From a scrum close to the Wimborne line we moved the ball across the field and back-rower Andrew Barrett scored, converted by Matt Chilvers. Wimborne got a penalty late in the half and we turned round 7-8 down.

The second half was a different story. Our forwards started to boss it and we spent most of the half in Wimborne territory. 20 minutes in Brandon Towells made a break in midfield and sprinted in to score behind the posts, again converted by Matt for a 14-8 lead.

10 minutes later we took a Wimborne scrum against the head and no. 8 Jamie Gray made a break for the line, to be denied a third try by two tacklers and the corner flag. There were a few nervous moments when Wimborne made good ground in our half following a penalty, but with no further scores we ran out 14-8 winners. This was a good win from a game between two well-matched sides.

Photos from A XV vs Wimborne: John Palmer