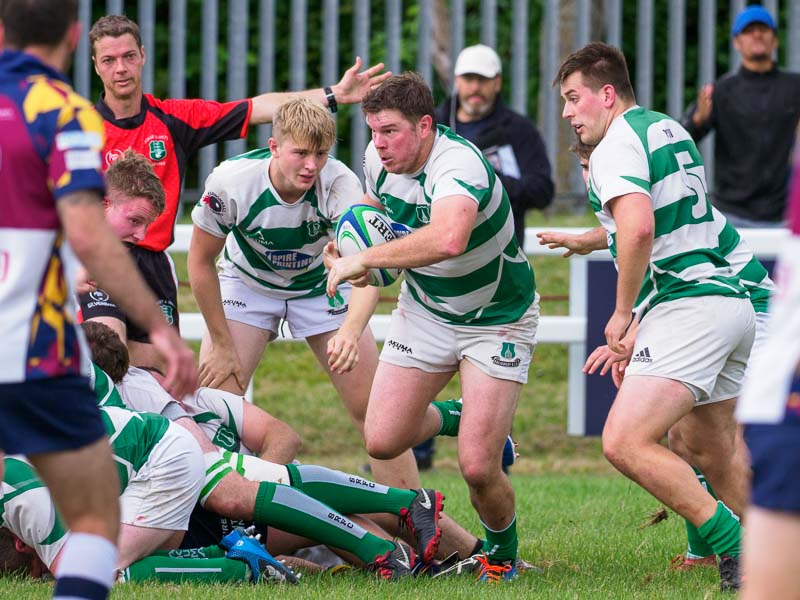 For a full report on Salisbury 1st XV against Oxford, the United XV against Swanage, and the A XV at Poole then please follow....

This was a much improved performance from a still depleted Salisbury side which hinted at better things to come.  Liam Gilbert returned from a serious knee injury and, along with Rob Becher and Jake McConnell, brought stability to the scrummage.  Young scrum half Jacques Kinnison continues to find his feet and is striking up an understanding with Dave Tonge at outside half.

The home side started caually and found themselves a converted score down within a minute but rallied and by the mid point of the half were ahead through tries from Gareth Blackborrow and Dan Hammond, and a penalty from Adam Clayson.  The visitors now took charge an, despite some Salisbury flurries, scored three unanswered tries to lead at the break.

Kinnison darted over from a scrummage to narrow the gap but Quins scored twice more before Blackborrow and Tom Tully crossed twice with Clayson adding the conversions.  The home crowd were enjoying the spectacle of Salisbury having nearly £200 of central heating allowance on the pitch, as Richard West joined Gilbert, Blackborrow and Jonah Thorpe in the fray.  Sadly all of this experience could not conjure a win and Thorpe departed early for a well deserved rest, two penalties from the Quins closing out the game.

Director of Rugby, Richard Lloyd, accentuated the positives and suggested that “on reflection the boys will be disappointed we lost.  We have other players returning to the side so we need to keep building.”  This week Salisbury face a tough test at high flying Wootton Bassett and will need to step up again.

Salisbury United got back to winning ways with a bonus point victory over Swanage and Wareham 2nd XV. A brace for the returning Richard Goffin and a hat trick for Ky Thomas, was supplemented by scores from Daniel Jugg, Nat Armstrong and Joel Wise. The final points came from the boot of prop Ben Cullen with a drop kick conversion to claim his first ever points in over ten years at the club.

Skipper Colin Horne and man of the match Daniel Peat led from the front as Salisbury third string secured a try bonus in thirty minutes.  The back three of Mike Bryan, Henry Collingwood and David Cleary ran the Wimborne defence ragged as the visitors enjoyed a huge margin of victory.