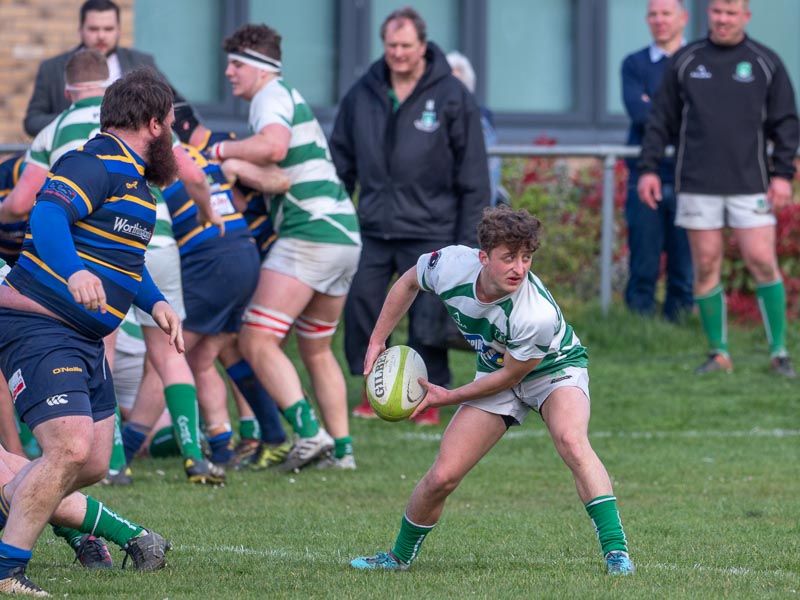 Reports from our senior sides on 13th. April, with the 1st., United and "A" XVs all with away matches for the last week of the regular season.

Salisbury in sixth place in the League travelled to Old Centralians, Gloucester in second place who needed a win to maintain their play off position. Salisbury took another much changed side, giving Max Lloyd his debut at scrum half with David Tonge moving to fly half.  Changes to the team have not prevented Salisbury putting together a string of good performances against the top sides in the table over recent weeks and this was to be no exception.

Old Cents attacked fiercely from the start forcing turnovers and stretching the Salisbury defence, but it was the away team's poor handling that gifted the first score for Old Cents quick backs to score in the corner, followed by a fine conversion. Although Salisbury were also showing attacking intent they continued to frustrate the travelling support with some sloppy handling which lost them a certain try, and then a runaway try for OCs to take a 14-0 lead.

The Salisbury scrum was looking comfortable and provided some good attacking ball, but despite threatening Salisbury were unable to convert any pressure into points allowing their large Gloucester opponents to move out to what looked like an unassailable 28 point lead.  But against the run of play, skipper Josh Green, playing in the second row, broke through to outpace the cover and score a fine individual try under the posts converted by Xav Hastings, making a good fist of playing out of position in the centre. Unfortunately, the comeback was short lived as Old Cents closed the half with a further score to take it out to 33-7.

A slow start to the second half made for bleak viewing. A lapse in concentration gifted a breakaway try quickly followed by a second from an attacking scrum. But suddenly things began to click for Salisbury and when Hastings took a quick penalty Christian Metson was on hand to finish in the corner, well converted by Hastings.

Salisbury continued to pile on the pressure, and Lloyd was providing good service to his backs, and from a scrum the ball went again to Metson who crashed over under the posts putting a four try bonus point within reach which was duly achieved when Old Cents struggled to contain a driving maul and gave up a penalty try. Although the home side had pulled back a further score to leave a final result of 51:28,  the spirit and commitment shown by Salisbury in the second half, which they won 21-17, was a very positive way to end the season and sees them finish seventh in the league of fourteen teams.

Salisbury's United and 'A' XVs were also both away playing teams in play-off places. In a see-saw game the second string took the game to the Dorset Dockers before a burst of scoring saw Dockers pull away to a 38:20 lead. However a serious injury to a Dockers player led to the game being abandoned after 57 minutes. The result does not stand but because neither team's league position is affected it will not be replayed.

Lytchett Minster vs "A" XV

The 'A's were at Lytchett Minster and gave a good account of themselves against a well organised side able to pull on a large supply of replacement players, going down 38:15.

Photos from the 1st XV's match from John Palmer: