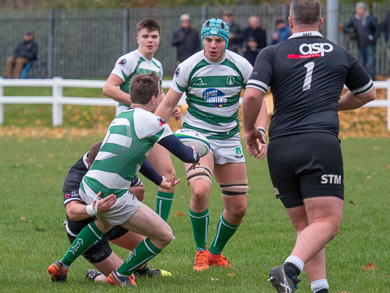 To read the reports on the 1st XV and the United XV against Wimborne please follow the link...

The winter bit hard for Salisbury, as Wimborne were welcomed to Castle Road, as the injury toll from the previous week had left them without a number of key players, most notable skipper Josh Green.  Joe Tully moved to outside half and Ollie Loach came in as fullback, Ben Stridgeon slotting intothe back row and Rob Larcombe taking the captain’s armband.

The home side were first out of the blocks and after a number of thrusts Ross Stanley crossed for a score.  The visitors now dug deep and, playing a strong offloading game, forced their way back into the match; two tries, both converted, silence the large and knowledgeable crowd.

It was the turn of the home side to try and gain a toehold in the game and Dan Luedicke pulled back three points with his boot. The lead was regained when Tully stepped over with Luedicke converting successfully and the city side remained in front at half time.

Wimborne started th second half of with intent and pulled two tries back in the first six minutes and securing their first bonus point.  Salisbury responded with a break from their own line which was recycled for Rob Becher to crash over..

Sadly that was the last score for the home side as the visitors added a further two scores to win, deservedly, 20-36.  It has been many a year since Wimborne last won in Salisbury and their celebrations were raucous.  Salisbury suffered three more injuries the most worrying being Duncan Grocock who left in an ambulance but is now recovering well.  Salisbury need to lick their wounds and rally their injured troops, as next week brings a visit to Banbury, always a tough fixture.

Armed with a strong scrum and a slick line out visitors Wimborne soon hit the front from a line out drive before Salisbury worked their way into the game with a Max Lloyd score after good approach work from Henry Wilson and Leon Landels, converted by Tom Buckingham. Salisbury then took the foot off the gas allowing Wimborne to move ahead with a penalty and second try. Struggling in the scrums, but electric in the loose, Chris Metson scored for Salisbury after a powerful burst, converted by Buckingham, before a soft try allowed Wimborne to lead at half-time 23-14. Debutante Lagilagi announced himself with a decisive break, offloading for Metson to score his second, Buckingham adding the extras to bring the game back to a 2 point difference. Although the last quarter belonged to Salisbury, they had conceded another score so had to chase the game, Metson repaying the compliment to Lagilagi before skipper Jake McConnell dotted down to take the lead for the first time. But Wimborne showed true character when they levelled the game and then scored twice more before the final whistle, taking advantage of another Salisbury yellow card to deservedly win 33-47.