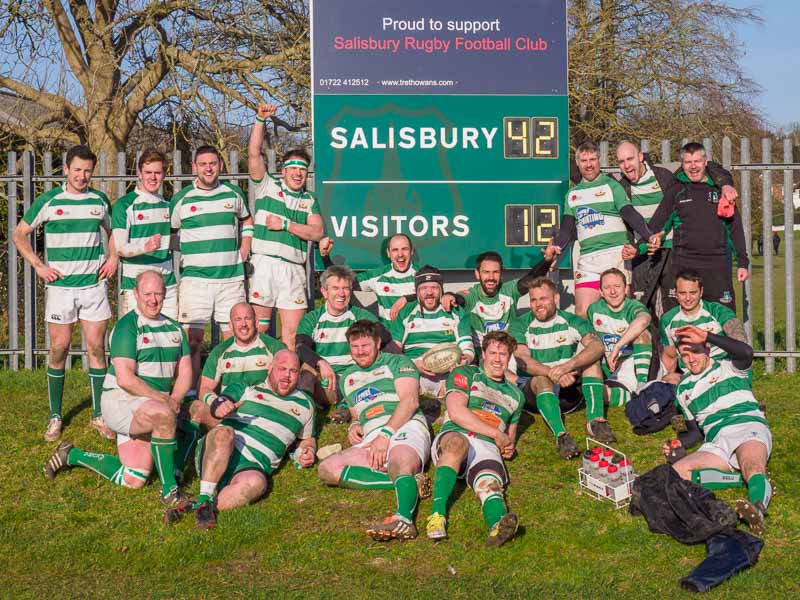 Salisbury's "A" XV welcomed Trowbridge for the semi-final of the Dorset & Wilts 3rd XV cup.

Salisbury’s third string were good value for their win in this Dorset & Wilts Cup semi-final, showing enterprise and good finishing skills to defeat a large and powerful Trowbridge team.

The brilliant winter sun set the scene for a stirring contest in which the home side’s greater invention and speed overcame a physical and direct set of opponents, motivated by Salisbury old boy Shane Johnstone. Centre Joe Jackson opened the scoring and converted his own try after 12 minutes, finishing a sustained period of Salisbury pressure and helping settle nerves. But the response from Trowbridge was immediate, helped by some very weak tackling. This saw the game settle down into the battle of styles, neither able to finish off opportunities, before scrum-half Nigel Thomas electrified the decent sized crowd with a slashing break and excellent finish, followed shortly after by a muscular effort from Gavin Shelton, both converted by Jackson to send the South Wiltshire side into the break with a healthy 21:5 lead.

More of the same was the request, but it was Trowbridge who scored next after a series of powerful bursts from their pack. Things were now very tight, compounded by Salisbury’s growing penalty count and failure to put their bigger opponents down early in the tackle. But this Salisbury team have a blend of youth and experience, and it was Captain Dan Hobbs and Dave Thorpe who took a grip on proceedings, Thorpe treating himself to a score, converted by full-back Tom Buckingham, which opened up the game allowing the spritely Salisbury backs to show their skills, including the evergreen Mark Lerpiniere who sidestepped his way over for a stunning solo try, Buckingham adding the extras. The game was all over, but there was time for Mike Bryan to finish the scoring with another fine solo effort,  Buckingham striking the conversion for a deserved and satisfying win.

We will face Bournemouth in the final, date and venue to be confirmed.