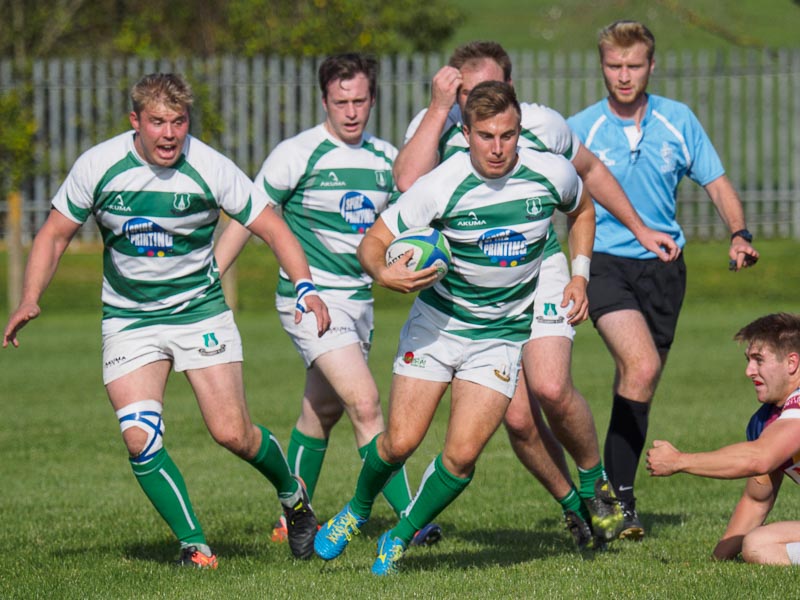 Report on the 1st XV, United XV and Walking Rugby

Castle Road played host to Oxford Harlequins and after a delayed kick off due to the visitors being caught in traffic, Salisbury started with intent and would have scored after 5 minutes but Dave Tonge failed to hold Matt Loader’s pass and the chance went begging.  Tonge was keen to make amends and crossed minutes later for the first score, converted by Loader; these two are developing a strong partnership at half back and attacked the line from all angles, forwards Richard Goffin, Bobby Saunders and James Hill were seemingly involved in everything and Callum McTaggart’s electrifying pace was a constant threat.  Salisbury were enjoying a strong forward platform with the returning Tom Ranaboldo providing some much needed bulk and loose head Serge Griffiths was enjoying a very good game.

The game appeared to be finely poised but Quins seemed to tire before the young Salisbury side and after exchanging penalties the home side stretched away.  Ranaboldo lumbered over for a try and then Tonge claimed his second before Dan Hammond crossed the whitewash for a third, two conversions from Loader making the lead 29-6 at half time.

Centre Jack Sheldrake scored minutes after the restart and then crossed again closely followed by Dan Hammond before the visitors were awarded a penalty try.  A kick through from MacTaggart was chased by Tonge for his hat-trick and Saunders claimed the final score of the day with Loader adding four second haldf conversions for a bonus point victory.

A delighted Captain, Josh Green, enthused “This was a pleasing performance and what is most satisfying is that we still left points out there.  (We are) a young side, with massive potential to improve and do some real damage this year.”  His thoughts will be echoed by the supporters present, many of whom will make the journeys to the consecutive away matches at Royal Wootton Bassett and Witney over the next two weeks.

Salisbury United crashed out of the defence of their County Cup to a committed North Dorset team. A slow start from Salisbury saw them fall behind but a ten minute purple patch brought tries from Alex Andreoli, Richard Knight and Rory MacTaggart, Knight converting twice, before a second score from the Dorset team left the half-time result finely balanced at 14-19. But the second half drifted away from Salisbury as injuries and a tiring defence struggled to cope with the forceful and direct running of their opponents, who scored 5 unanswered tries in the second period to give a final result of 41:19.

Salisbury were one of six teams represented at Bristol’s Walking Rugby Festival and proudly carried the mantle of “unofficial World Champions” but sadly losses to eventual winners Kingswood and Bristol condemned them to a play off match in which they triumphed. John Holt-Keene at 83 years of age recognised as the oldest competitor and brought home a ball.  Plans to reclaim their world crown are in place!

Photos from the 1st XV win against Oxford Harlequins