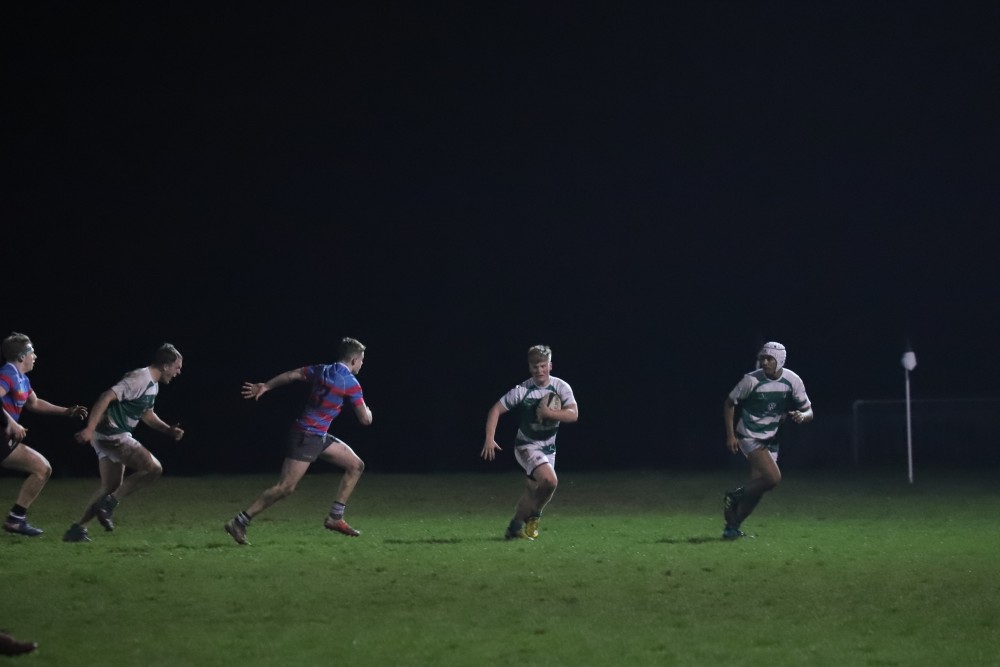 Salisbury Colts travelled to Sherborne for the final of the Dorset & Wilts Bowl competition on a clear Friday evening. This was the first time the team had played under floodlights and would be a new experience for a lot of the team.

Salisbury travelled with a full squad and were confident of a strong performance having previously beaten Sherborne in the league. Sherborne had other ideas and put Salisbury under pressure from the kick off. Salisbury's defence held firm and gradually gained more possession and were able to put a few phases together. Both sides were getting short periods of possession but neither side could make the telling break. This was to be a key theme throughout the match with both defences being dominant. half way through the first half salisbury gained some territory and possession in the home 22. After a couple of pick and drives near the Sherborne line the ball was passed a few metres from the break down to Jordan Jones running at speed who crashed over for the first try. The conversion was missed to leave Salisbury with a narrow lead. The game continued in a similar vein with neither side being able to break the defence to leave Salisbury with a narrow lead at half time.

The second half started as the first half finished. Both sides were throwing everything into attack and defence and playing with full commitment but could not make a breakthrough. Salisbury got close to the Sherborne line on a couple of occasions but could not find a way through. With time slipping away, Sherborne did not give up and were camped in the Salisbury half. A break in midfield saw Sherborne deep in the Salisbury 22 only to be denied by a desperate tackle 5m out. Sherborne recycled the ball quickly and span the ball to the wing who scored into the corner. A difficult conversion was struck well on target but just faded to drop under the crossbar to leave the score finely balanced at 5 - 5. Both sides desperately tried to get the deciding score in the final few minutes with full commitment to the final whistle but neither could make the breakthrough.

With this being a junior game no extra time can be played so the result had to be decided on count back. With the same score, the same number of tries and no penalties it came down to the side that scored first, meaning Salisbury were declared the winner. This was a fantastic performance by the whole squad built upon teamwork and commitment and they should be extremely proud of their achievement.