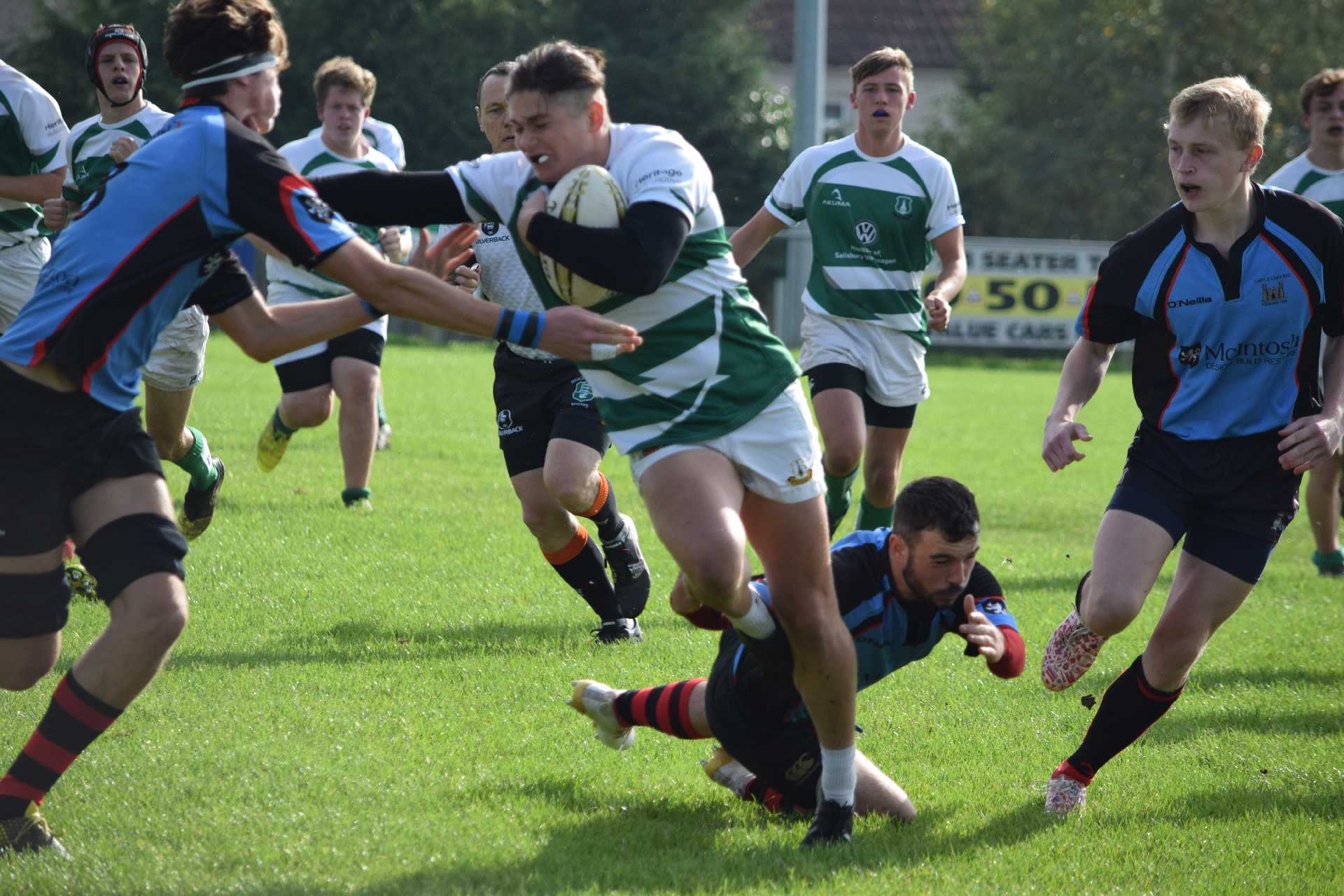 On a bright and sunny afternoon, Salisbury Colt entertained Castle Cary. The game started at a frantic pace with both sides on playing open attacking rugby. Salisbury gained the initial momentum, broke in midfield and shipped the ball to Joel Wise on the wing who almost made it to the try line. He was hauled down just short. Salisbury controlled the ball well and after a couple of drive close to the ruck, passed the ball slightly wider allowing Jordan Jones to crash over for the first score close to the posts giving Xavier Hastings a relatively simple conversion.

This stung Castle Cary into action and they dominated the next quarter of the game making inroads into the midfield and twice carving the Salisbury defence open to score two converted tries in quick succession. Salisbury were not to be outdone and tightened up the defence and managed to gain some ground. After some repeated phases of play Salisbury worked the ball to create some space for Xavier Hastings to crash through and score out wide. He converted his own try from near the touch line to leave the half time score at 14 a piece.

The second half started in s similar fashion to the first with the ball being kept in play for long periods of time but neither side was able to break the others defence. A moment of opportunism by Salisbury saw Joel Wise come up in defence quickly and snatch an interception. This time he was not going to be denied as he raced off towards the posts. Despite a valiant attempt by the Castle Cary defence he was able to dive between the posts for the first score of the second half. Another relatively simple conversion from in front of the posts by Xavier Hastings saw the home side lead for the second time. This time Salisbury were not going to relinquish the advantage. Castle Cary attacked in wave but the defence stood firm and denied the visitors any try scoring opportunities. Salisbury were also putting some phases together and were pressurising the visitors try line. At one of the rucks the visitors scrum half strayed offside and kicked the ball out of the home scrum half's hands. The referee deemed this to be serious enough to warrant a yellow card. With the opposition now a man short, Salisbury realised that there would be more space out wide. Frome the resultant penalty, Salisbury drove the ball in close to tie in as many defenders as possible before spinning the ball wide for Ben Coles to go in unopposed. The try was duly converted by Xavier Hastings to leave Salisbury to score clear with 15 minutes to play. Despite Castle Cary looking very threatening in the final few minutes the Salisbury defence held firm to close out the match.